Picking up from my first realization that my passion might also be a gift, as explained in Part One.

Over the years, I’ve had opportunities to display my creative demons before an audience. An effective little soap opera episode in Grade 12. Geeky science humour in my own magazine. Heart-wrenching poetry following the end of a close friendship that might have been much more.

I worked my way into the magazine world, writing interesting stories about interesting discoveries and advances, but it wasn’t the same. The words poured forth and the story-telling skills improved, but I was always a chronicler of someone else’s story.

Creativity expressed itself in my approach to the story. In seeing a story that no one else saw. In context that was invisible to everyone else. Creativity manifested itself in identifying authors and writers from all walks of life to fill gaps in the magazines. I may not have been the best project manager, but I was definitely the most creative.

As I matured in my jobs, I extended this creativity to everything I did. Looking for effective solutions to seemingly intractable problems. But it wasn’t enough. That voice within me cried out to be heard. And the more I worked—and overworked—to distract it, the louder it screamed. So loudly, that even my wife could hear it.

While sitting in an Orlando hotel bar one night, she finally challenged me and my workaholic tendencies, demanding that we come up with a hobby for me. When pressed, I admitted that I had always felt like I’d been born 30 years too late. That if I could have any miracle in my life, it would be to work on those old sketch comedy shows from the 1950s as a comedy writer. Sid Ceasar’s Show of Shows came to mind. Imagining myself in the writers’ room with Mel Brooks, Larry Gelbart, Woody Allen and Neil Simon.

Neither of us knew how to make that happen, but my wife challenged me to find something at home that would set me up in that direction. The next week, I signed up for my first improv class at Second City.

Although it still wasn’t where I wanted to be—more performance than writing—the improv classes were amazing; therapeutic on a variety of levels. Eventually, though, I stumbled onto their sketch comedy writing program and that’s when I hit my stride. A wonderful instructor, talented zany fellow students.

The words flowed incredibly quickly. Within weeks, I had dozens of sketches and felt like I was making serious headway in my education of what worked and why. If there was a problem with the class, it was that my production vastly outstripped the need. I tried new things. I broke out of my comfort zone. I pushed my limits. My only goal was funny.

As I honed my sketches, I prepared for the reality of rehearsals with actors, when all of this work would really come true; when my efforts became more than an academic exercise. Rehearsals went well. Out actors seemed genuinely grateful to be performing our work. I saw what worked and what didn’t, even in the work of others.

Interestingly, I wasn’t in control of the process and I was okay with that. There’s something to be said for being so far out of your element that you recognize the limitations of your control. I had complete faith in the director and our actors. I believed they too wanted this to work as badly as I did.

And then the day of the performance arrived. Nervous energy ran through my body and I couldn’t sit still. I could barely communicate. There was no fear. Only anticipation and potential validation. Was I funny?

The day we premiered Da Tory Code was easily one of the best days in my life. The audience laughed. Not at everything, which was a valuable lesson, but they laughed at enough to validate my talent. 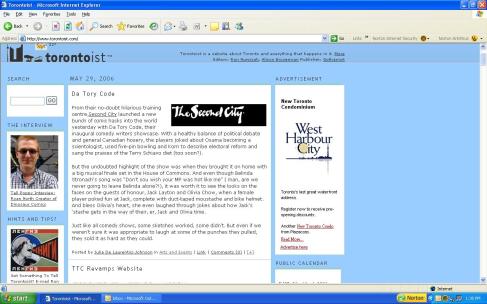 One thought on “My Creative Journey – Part Two”