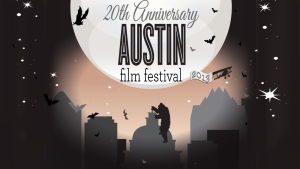 So, it would seem that rewrites work.

Last year, I entered my screenplay Tank’s into the Austin Film Festival screenplay competition and other than some amazing notes, it went nowhere in the competition. (My spec teleplay of The Big Bang Theory, however, reached the second round before bowing out.)

Fast-forward a year and four rounds of revisions, I just learned that the same screenplay made it to the second round of the competition before bowing out…Tank’s made it to the top 10% of its category, which feels pretty good considering the AFF received more than 8,600 screen- and teleplays this year, its highest submission rate ever.

Aside from the $200+ refund on my registration fee, what makes this really awesome is the esteem in which Second Rounders and higher are held at the screenwriting conference portion of the film festival. You see, the Austin Film Festival is more than just a whack of movie screens and Hollywood A-listers (like my own Toronto International Film Festival; on now). The AFF is also a 4-day screenwriters’ conference and love-fest, as 400+ introverts try to get just drunk enough to come out of their shells and commune with Hollywood screenwriters and film-makers.

If you are a screenwriter and have never been to the AFF, GO! It is worth the money.

Sure, some of the sessions amount to little more than hero-worship where you’ll hear questions like: “Remember that scene in X-Files when Mulder gave Scully that look? Did you write that, because that was awesome?” But most of the sessions are actually helpful discussions and learning opportunities with the film and television world’s elite writers…and best of all, these Gods not only stick around, but they’ll actually talk to you at the BBQ or in the bars. It’s like they give a shit about your shit.

Last year was my first AFF, and I was the introvert amongst introverts looking for the closest corner in which to nurse my beer or G&T. This year will be different. This year, I will move out of the corner and occupy the middle of the room…who knows, I may even talk to someone. (God, I need a drink!)

PS If you think I’m bragging, my prowess is kept in check by a friend I met at AFF who had two Second Rounders and one Semifinalist screenplay in last year’s competition alone.

2 thoughts on “Another year, another AFF Second Rounder”