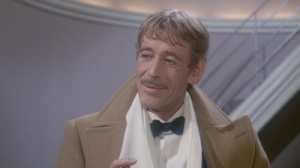 The announcement of Peter O’Toole’s death came as a bit of a shock to me. Not so much that he died—he was a very old gentleman—but rather in how it affected me. I felt like I’d lost a friend whom I had not seen in quite some time.

Fairly or unfairly, I give Peter O’Toole a lot of credit for the life that I am leading right now: the life of a creative artist who plies his art with words. You see, Peter O’Toole was the biggest name in a little movie that might not have seen the light of my consciousness had he not been in it.

The movie is My Favorite Year. 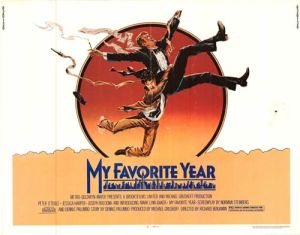 For the uninitiated (For shame, Swanny), the movie tells the story of a couple days in life of a budding young comedy writer working in the 1950s on the King Kaiser Show; a clear homage to Sid Caesar’s Show of Shows. On the day the movie opens, Benjamin is going to meet his greatest hero, fading matinee idol Alan Swan; a clear homage to Errol Flynn. Unfortunately, Swann’s star has faded into alcoholism and practical destitution, and it becomes Benjamin’s job to keep Swann sober enough for the live television performance. The rest is a love story between these two men; one ascending, the other wishing he were dead.

If that doesn’t want to make you see the movie, you’re dead yourself.

The thing is, for all the university science degrees and work I had done, my life was incomplete. What I didn’t realize right away upon seeing My Favorite Year—mostly because the young are stupid and blind—was that I desperately wanted to be Benjamin. More accurately, I WAS Benjamin, I just didn’t know it. 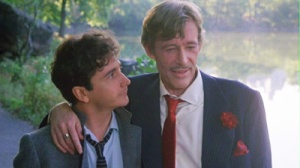 I was a creative writer. I was a comedy writer. But I didn’t know how to express it beyond my own personal doodlings. And even if I had, science seemed the more rationale move (btw, I love science…really, I do).

As I’ve related in previous posts on my creative journey, it wasn’t until my wife took me aside one day and cornered me into answering what I wanted to do more than anything that I realized and embraced my inner Benjamin.

My life of today was still about a decade away, but that moment, that recognition, that admission started the ball rolling.

I had a visual to go by, a guide. I couldn’t go back in time to write for a 1950s sketch comedy show, but I could work toward the modern equivalents.

The other posts will tell you what I did, but without having seen My Favorite Year, I might not have been able to articulate my dream that fateful day.

And without Peter O’Toole, there might not have been a My Favorite Year to see.

So thank you, Mr. O’Toole. Aside from being one of the finest actors to walk this stage, you made dreams come true. This dreamer will be eternally grateful.

If I were truly plastered (scene)

This is for ladies only (scene)

Who the hell is Niblick? (scene)

(Images are property of owners and are used here without permission, but a lot of love and gratitude)