Eighties are the new teens…as in everything you loved about the 1980s is coming to a theatre near you. As the latest example, we have Denzel Washington in the role of Robert McCall in a revisit (can’t really call it a reboot) of the television series The Equalizer.

The central conceit of both the film and television series is that McCall is a retired special forces agent (think CIA) who tries to help people out when they get run over by criminals, corporations or malevolent government forces.

Whereas in the TV show, we see his mission fully formed, the movie is a bit more of a prequel, showing us the transformation of McCall from quiet man to vigilante.

The movie opens with McCall being the happy guy working at a Home Depot, jovially chatting with co-workers and providing something of a father figure to his younger compatriots. But away from the job, we see that he is a loner, a man with a heavy psychological burden that keeps him from sleeping.

And it is this insomnia that links him to young prostitute Teri (aka Alina, played by Chloe Grace Moretz) who is fascinated by this man who sits in a diner at 3 am, drinking tea (he brings his own bag) and reading classic literature (we open with The Old Man and the Sea…the books are a metaphor for the character). Again, the father figure comes into play as McCall is one of the few men who treat her as a human being and challenge her to be the woman she wants to be, not the victim she is.

And it is this bond that causes McCall to act when Teri is hospitalized by her Russian mobster pimp. A noble man, McCall offers to literally buy Teri’s freedom, but when the mobsters simply laugh him off, a life of brutality surfaces in the scarred knight and the world dissolves into chaos.

To give you any plot details beyond this would be to potentially spoil the movie.

Denzel Washington is an amazing actor and is wonderful in the role of Robert McCall. Offering a very different take on the character than his television predecessor Edward Woodward, the two actors share the ability to display a man who is outwardly in control of all situations but at the expense of always holding onto an inner torment that they are afraid to acknowledge, let alone unleash.

But whereas the TV equalizer rarely got his hands or his clothes dirty (compare TV poster below with film poster above), the film equalizer is willing to release a storm of martial arts and weaponry on the bad guys. Thus, the film is much more action packed than the TV show. 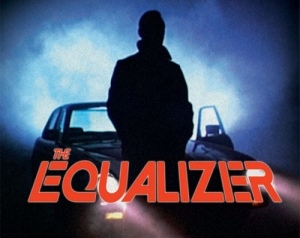 To the credit of director Antoine Fuqua—who also directed Washington in Training Day—despite at least a dozen scenes of intense violence and blood-letting, he does an amazing job of minimizing the amount of actual blood that reaches the screen. In part, he accomplishes this by shooting the most violent scenes in darkness such that you only really see light reflecting off dark puddles. Likewise, when McCall does resort to using make-shift weapons (remember, he works in a Home Depot), the camera often switches to McCall’s face as he uses the weapon rather than to weapon and victim.

Unfortunately, McCall is such a cool and controlled customer that I never really worry about him. I cheer his victories when he vanquishes the dragon, but I find it difficult to really attach myself emotionally to the man. I like the quiet man, but I find the killing machine to be just that, a machine; an automaton that does not touch my heart. And with the exception of a handful of moments, we never really get a chance to appreciate the toll these actions take on him.

The other place I feel the story falls down is in the use of the Russian mobster sent to clean up the mess that McCall started, a man simply known as Teddy. Played by Marton Csokas, Teddy and McCall are equals. The same side of the same coin. Equally smart. Equally charming. Equally viscious. And as such, the only real threat in the entire film to McCall. 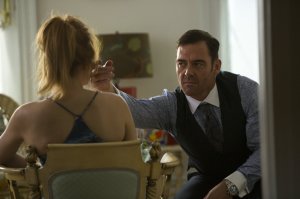 (As a side note, if this role is any indication, we want to keep our eye on Marton Csokas. He will do amazing things.)

There are a couple of scenes where the two men literally face each other and calmly discuss the situation. One scene in particular is the best thing in this movie from my perspective. While on one level being the calmest moment in the movie, it is also the most chilling because of that calm. You really don’t know what’s going to happen.

And that’s where my problem lies.

Having set up the perfect opponent for McCall, the writer Richard Wenk (who also penned The Expendables 2) doesn’t really deliver. The audience was promised an epic show down between these two characters, but while they do clash, it is anything but epic (photo below is not from clash).

The Equalizer is entertaining. It is a wonderful diversion that requires little thought of its audience. It is Jason Bourne for the middle-aged set (but with enough carnage to keep the young’uns interested). It should, however, have been better.

But when it comes right down to it, the studios don’t really care if you like it, because they are already working on the sequel.