While attending the surprise birthday party for a friend in the sciences, I noticed he owned a coffee mug from a group called Life Sciences Career Development Society based at the University of Toronto. Actually, to be more accurate, what caught my eye was the DNA double-helix on the mug…and the fact that it was wrong.

As someone with biochemistry & genetics degrees who has written about the life sciences for ~15 years, this seemingly innocuous error drives me crazy. This must be how copy editors feel when they see a misused semi-colon (and I’m sorry about that). 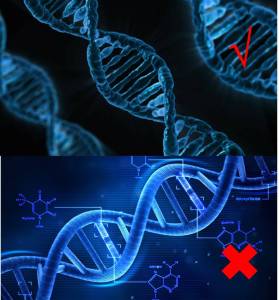 For the non-biochemists, through a characteristic known as chirality (look it up…too hard to explain here), the typical DNA double-helix in human cells—the famous Watson-Crick-Franklin structure or B-DNA—has a right-handed helix. This means that if you could see the double-helix (above) and let your fingers follow along the curve of one side as it wraps around the other, you could only do this comfortably with your right hand.

You can see that in an example of a single helix that curves either to the left (left) or the right (right).

Unfortunately, somewhere in the mists of science illustrations time, an artist drew the double-helix of DNA in the wrong direction and that double-helical abomination has perpetuated ad nauseum, including irritatingly enough, in science publications and scientific logos such as a recent health article in the Toronto Star (image below), the cover of a sci-fi novel and the LSCDS logo.

And if I only saw this in 50% of the images, I’d be irritated but probably not the raving loony I am now. But no, this freak of nature is everywhere. The correct right-handed DNA illustration is the anomaly.

So why does this matter? Maybe it doesn’t, and I am just a raving loony.

But for me, I struggle with what else might be wrong in a life science or healthcare story if they can’t get the DNA helix right. Do I trust the math of an investment planner who doesn’t know that four quarters equals one dollar?

Luckily, the fix is an easy one. Simply mirror the image you have (not turn it upside down) and the left-handed double-helix becomes a right-handed one. (In a mirror, your actual left hand looks like a right hand.)

So, medical illustrators everywhere, please fix your catalogues of scientific illustrations. My head can’t take too many more explosions.

[Also, from a design perspective, up and to the right is more palatable for North American audiences as it implies future success (e.g., rising value). Has nothing to do with handedness, here.]

For the more biochemically savvy:

Yes, there is left-handed DNA, which is also known as Z-DNA. But as you can see from the illustration below, its structure is significantly different from the smooth-flowing curves of B-DNA (and the equally unusual A-DNA).