The phrase that irritated me for the thousand times a week it bore into the back of my head now haunts me.

It had taken forever for me to convince the boys to leave their seat belts alone, to keep their hands from compressing the buttons that stood between confinement and filial battle. And more than once, I found myself wishing that rather than cross their laps, the belts crossed their mouths, stilling the staccato tarantella that skipped across my brain.

Silently, I would curse my husband for wanting children so close in age; built-in playmates, he would argue as though siblings were naturally adept at civility and sharing. Never marry someone who was an only child, I would remind myself; too many delusions of a happy peaceful family to dispel.

The words and whine a cattle prod to my ear drums, my head involuntarily snapping to one side, threatening to glance off the door frame, the open window insufficient to drown the drone from the back seat.

“Has the car stopped moving?” I’d shout at the rear-view mirror as though it was the source of my agony rather than simply a reflection of what I’d left behind.

For a second—a glorious second—the car would go silent, but the silence was an illusion, a prelude to crises yet to come. Inquisitive urges not quelled so much as turned aside, as unsatisfied attention-seeking demanded to be slaked.

“I’m not doing anything,” its wounded echo, pre-emptorially defending actions yet unchallenged.

“Enough,” I charged, confronting the miniature offenders with turned head.

The light was green, or at least that’s what the report said, as though the colour protected me from my guilt any better than it protected my car from the panel van approaching from the left; as though an absence of fault even approximates an absence of self-loathing anguish.

The car was a write-off, and after six months of my husband’s words telling me it wasn’t my fault while his eyes told another story, so was my marriage.

And now, sitting here in my wheelchair, all I can think of is “Are we there, yet?” 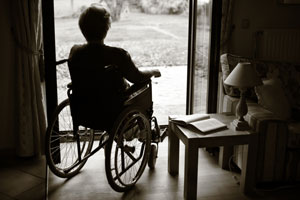