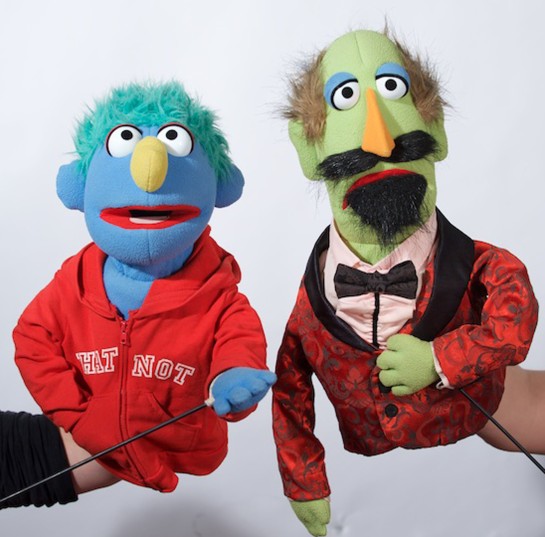 Your dad just died. Your mom married your uncle, who stole your crown. Your girlfriend went bonkers. And your best friends are trying to kill you.

You thought being an 8-year-old was tough.

Who in their right minds would try to turn Shakespeare’s Hamlet into a puppet show for kids? Shakey-Shake and Friends would, offering  Hamlet…A Puppet Epic! at Toronto FringeKids! 2015.

Before you even step into the theatre, you know that the producers understand the challenge they’ve set for themselves.

“We’re doing the whole thing (deaths and all), but in a light-hearted way,” reads a sign outside the theatre. “Everyone who dies gets a very silly ghost sheet and continue to comment on the action! (It’s not too scary.)”

And as far as I’m concerned, they deliver on their promise. From the moment the lights come up to the second they finally drop, the puppeteers put everything they have into entertaining their audience.

Whether it’s one of the characters, or the erstwhile hosts Shakes and Zip (pictured above), somebody always steps forward to help the kids understand what’s going on. And they do it without ever coming across as teacher-y, or at least, not for very long without a heavy dose of silliness hard on its heels.

What does the “to be or not to be” speech mean? Why does Hamlet’s mom not clue in to what’s going on? It’s all explained, gently and sweetly, to the kids without ever being condescending.

And nicely, the cast knows that their audience extends well beyond the 6- to 10-year-olds. Throughout the play, there are jokes for all ages and references from popular events and news items from last week, last year and last century.

This appears to be a very good decision, because about 85% of the capacity premiere crowd was well beyond puberty.

Having spent some time as a puppeteer, I didn’t think the puppetry technique was particularly solid, but I’m pretty sure I was the only one who cared. It didn’t seem to stop the wall-to-wall smiles and laughter that held the audience from start to finish.

I thought all of the performances were quite strong, but the show was absolutely stolen—if laughter volume is any indication—by Shakes/Polonius. Even in death, this character managed laughs that literally stopped the show.

Hamlet…A Puppet Epic! is easily the most entertaining hour I have spent in years.

2 thoughts on “Hamlet…A Puppet Epic! at Toronto Fringe (a review)”