When all else is stripped away, only truth remains

“Being naked and too honest makes you predictable and maudlin,” chided one of the characters early in OverTime, which premiered tonight at the Robert Gill Theatre for the Toronto Fringe Festival. And for the next 85 minutes or so, the cast proved the exact opposite was true.

In some ways, watching OverTime was like redecorating a home, peeling back the decades of paint one layer at a time. As each coat is removed, you uncover the laughter and tears of that moment in time. And once the last layer is gone and the history is revealed, all that’s left is the truth.

It is only as the play deepens that we learn that truth is what retired school teacher Carla (Elva Mai Hoover) feared most when she uttered that line to her protégé Darby (Timothy Eckmier). As Carla mentored Darby to become the next great playwright, she argued that mystery must be maintained.

Truth was also the motivation behind the other plotline of the play as young blogger and photographer Jewel (Andrea Brown) struggles to pull her father Linus (Tufford Kennedy) out of the safe environs of the hockey rink. A successful coach on the outside, Linus is a wreck inside, and Jewel wants to ease that burden. 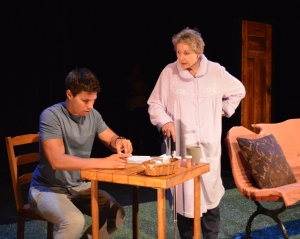 OverTime playwright Romeo Ciolfi did an amazing job weaving these two story lines together. With each passing moment, it felt like another layer of paint was removed to reveal a bit more of the truth. And at least for me, the story was anything but predictable.

Sure, I felt Ciolfi could get a little heavy-handed with the metaphors. I would not have been surprised, on occasion to have seen a surtitle card reading “Metaphor here”, but I never felt they detracted from the increasingly tightly woven story.

What impressed me even more, however, was how the same layered revelations arose from each of the characters. With each passing moment, the characters became deeper and darker. Part of this richness was the writing, but I also credit the cast. 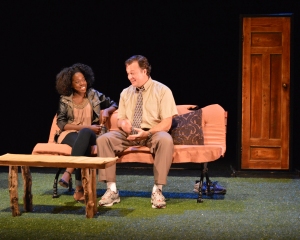 Rarely do I praise an entire cast of a production, but I could not find fault with any of the performances. And no single actor deserves loftier praise than any other. To me, this was an ensemble performance. Remove any one of these actors and I don’t think this play would have been as good.

As with the play, there were times when impassioned performance became overwrought melodrama, but I largely felt these moments were the exception. These actors and their descent into raw truth had me mesmerized for 90 minutes, and I found myself praying we would go into overtime.

Without hesitation, I would watch this performance again and again, just to make sure I didn’t miss anything.

[Adapted from a review that first appeared in Mooney on Theatre.]