The evil that men do lives after them;

The good is oft interred with their bones.

So let it be with Caesar. 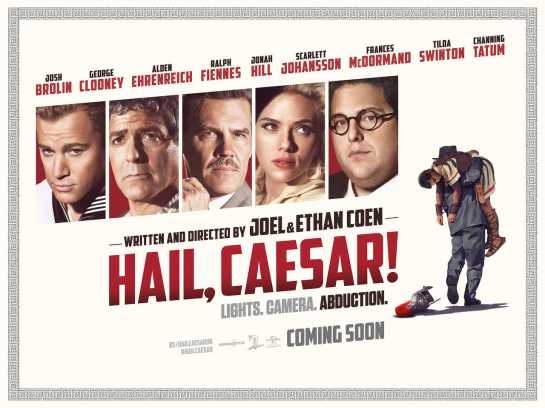 The Coen brothers love the Golden Age of Hollywood, the era when studios ruled, actors did what they were told, writers remained in the background and sound stages were spectacular. To demonstrate their adoration, the brothers wrote, directed and produced a love letter that showed up on theatre screens this week as Hail, Caesar!.

Unfortunately, the love letter they wrote was less a Shakespearean sonnet than the heart-dotted-i gushings of a pre-pubescent girl.

Briefly, Hail, Caesar! is a week-in-the-life story of Eddie Mannix (Josh Brolin), an executive for Capitol Pictures (think back to Barton Fink), a classic Hollywood studio. And like any good executive, Eddie spends his days and nights fixing the various issues that crop up around the studio, while trying to keep everything under wraps from the prying eyes of the gossip columnists (Tilda Swinton & Tilda Swinton).

Today, for example, Eddie is dealing with the unplanned pregnancy of twice-divorced swim star DeeAnna Moran (Scarlett Johansson), a celebrated cowboy (Alden Ehrenreich) unwisely thrown into a high-society role, and the kidnapping of Baird Whitlock (George Clooney) during the final days of shooting for the studio’s largest production ever, the titular Hail, Caesar: A Tale of the Christ. 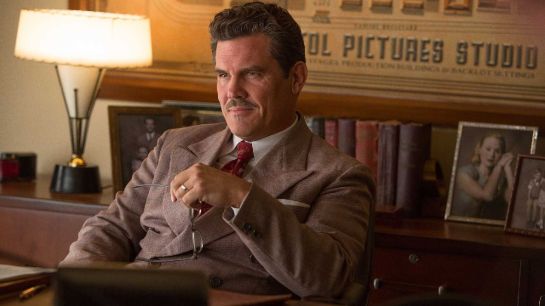 And as Eddie scurries from location to location, equally supported and thwarted by the Hollywood clichés that surround him, he takes time to repeatedly visit confessional. Oh, and he is also being courted by Lockheed Martin, who want to make his life simpler while giving him buckets of money.

Now, one does not walk into a Coen brothers movie expecting something conventional, whether comedy or drama. You know that in many ways, you’ll experience theatre of the absurd. Unfortunately, this movie doesn’t really live up to that standard. It is more theatre of the silly and mildly amusing.

If the main story of Eddie Mannix is the Christmas tree, the various subplots that infect his day are more the individual ornaments that decorate the tree rather than the branches that flesh it out. For the most part, the subplots are self-contained elements that go nowhere. Each one carries certain amusement—the movie does have its laugh-out-loud moments—and provides a fire against which Eddie must test himself, but even here, the fires aren’t particularly threatening and Eddie handles all of them with aplomb (if exhaustion).

And because the individual subplots—Eddie’s raisons d’etre—are so thin, the main plot is thin. I get that his journey through the events of the week is meant to symbolize Christ’s walk through the desert, and that Lockheed Martin is the Devil offering to make Christ King of the world. But I don’t care.

I really never invested in Eddie, and so the rest of the film is largely eye candy.

Now, as eye candy goes, this is some lavish stuff that leaves you with a high-end sugar rush. The brothers did a wonderful job of capturing the look and feel of those classic Hollywood films, right down to some of the ham-fisted acting and over-emoting for which the era is famed. And full credit on the song-and-dance number starring Channing Tatum.

But like any sugar rush, the dazzle wears off quickly, and I left the theatre a little empty.

I really wanted to like this movie. Like the Coen brothers, I have a rabid affection for the studio era and its stars—don’t get me started on Errol Flynn and Olivia de Havilland. Unfortunately, Hail, Caesar! was the equivalent of fine-dining at Costco…it only really whets your appetite for something better.

And men have lost their reason. Bear with me.

My heart is in the coffin there with Caesar,

And I must pause till it come back to me.