As a disclaimer, you should know that I have grown weary of comic book movies and the various universes involved. Thus, I understand if some of you stop reading here.

Are they gone? Is anyone left?

Doctor Strange is the latest entrant to the ever-expanding Marvel universe. In this origin movie, it is the story of a brilliant, ego-driven neurosurgeon (Benedict Cumberbatch) who suffers a debilitating accident that destroys his career and therefore his reason to live. In trying to regain use of his hands, he finds a mystical Eastern retreat and begins a journey into magic, multi-planed realities and lessons in humility through the guidance of the Ancient One (Tilda Swinton).

The arrival of Strange might not be totally of his choosing, however, as he reaches the retreat at a time when it is facing its greatest threat, a former student (Mads Mikkelson) who has moved to the Dark Side and wants to feed the Earth to a Dark Entity (Dormammu) that swallows universes whole. And so the battle ensues, Dark vs Light (well, mostly Light), with weapons of magic, shifting realities, and literally shifting buildings that hearken back to the movie Inception.

And this is where I struggle with this movie. There is little here that is in any way original.

For me, this is The Shadow (look back in the archives for that one) meets Inception, with a soupçon of Kung Fu Panda and Harry Potter And The Who Gives A Damn, each of which I felt were better movies than Doctor Strange.

From Inception to Strange with little improvement

On the plus side, Cumberbatch is perfectly suited to this role, his droll delivery of cornball one-liners perfectly pitched—a la Robert Downey, Jr.’s Tony Stark. And the visual paintings of colour, perspective and sound are insanely rich and dazzling, worthy of the best recreational pharmaceuticals (so I am told).

But that is really all that this movie has going for it: big-screen kaleidoscope and Tony Stark 1.1 (can’t even manage 2.0).

The story is pretty linear with zero twists or turns. And even with that, the writers felt they needed to explain the story every 30 minutes or so with long streams of exposition. Apparently, all of the budget was spent on special effects and so they were forced to break the “show, don’t tell” writers’ convention. These aren’t reveals; they’re explains.

And aside from Cumberbatch’s waltz through ego and bon mots, all of the performances by the supporting actors are largely wasted.

Tilda Swinton’s Ancient One couldn’t hold the chopsticks of Dustin Hoffman’s Master Shifu (Kung Fu Panda). Mads Mikkelson’s Kaecilius is totally silly-us and I don’t recall any explanation as to why he chose to leave the school and work for the Dark Side.

And what the hell happened to Rachel McAdams’ career? Here, she plays Strange’s estranged love interest Christine Palmer and is given nothing to do aside from roll her eyes, squeal at loud noises and apply defibrillator paddles every half-hour or so. 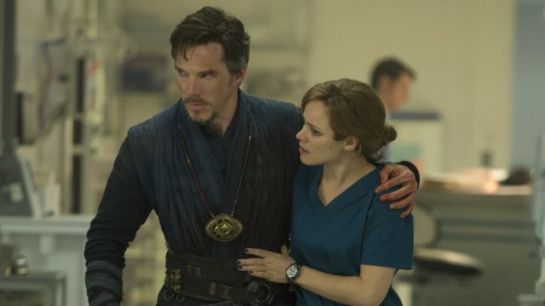 Sometimes, it is just about cashing the cheques (Benedict Cumberbatch, Rachel McAdams)

As my friend and Movie Review 360 partner Danny suggested (see link to his review below), origin stories are throwaways, their only job being to set up the characters for the following movies and cross-overs. I can’t disagree with him on that point…this movie should have been thrown away.

As just the latest piece in the Marvel cinematic universe, the real meat of Doctor Strange will come as he begins to interact with all of the other tight-wearing, planet-razing whackos—and stick around through the credits for the first hints of that.

So, why even bother with this movie?

Nothing in Doctor Strange was necessary for any of what follows, I am confident.

Okay…comic book fans can come back in the room!

If you’re looking for some dazzling eye candy and a few choice ripostes worthy of Tony Stark, Doctor Strange is the perfect popcorn muncher. For everyone else, check out 1994’s The Shadow…it really is better than it should be.

This is the champagne of Marvel movies (Global News)