The other day, while driving with a friend of mine, I came to the sudden realization that I no longer know the alphabet. Please understand, this is not an Alzheimer’s moment—not to make light of that debilitating condition—but rather a sign of the place I have reached as a writer.

You would think, if I am a writer, that the alphabet would be the most subconscious of things in my life. Everything I have just written has relied on the use of letters. But it’s not the letters I’m having problems with…it is the alphabet.

My first experiences with a typewriter were during typing class—how ironic—back in high school, where I was the only boy in a class of about 20 girls. So much for paying attention to the typewriter keys. As I became more comfortable with the idea that the girls and their developing curves would still be there for my next class, however, I slowly paid more attention to and became more comfortable with the keyboard. 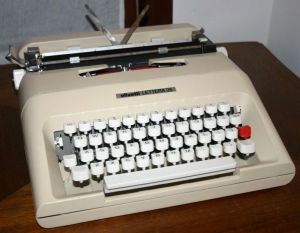 As a side note, I am old enough that my initiation to typing was on a manual typewriter, which meant pounding on the keys to make keystrokes. To this day, my various computer keyboards suffer mercilessly as I continue to pound the keys rather than simply depress them.

In the decades since high school, I moved to electronic typewriters and then to computers and smart phones…and in all cases, I worked the old standard QWERTY keyboard, on which the keys were supposedly arranged based on usage in the English language and finger ergonomics.

My understanding, however, is that the facts supporting this arrangement were actually incorrect, and that there have been several attempts over the past century to try to introduce new letter arrangements on keyboards based on more accurate usage statistics. These efforts have universally failed, and I have always wondered why. Now I know.

The event that triggered my alphabetic crisis was a trip to Buffalo, NY, to see the chicken wing movie I described in an earlier blog post. As my friend and driver Mike was unfamiliar with the streets of Buffalo, he asked me to type the address of the theatre into the GPS unit, which is when the proverbial if not literal wheels fell off.

The keyboard was in alphabetical order starting left to right from top to bottom.

I couldn’t find any of the letters I needed. Despite knowing immediately that they were arranged in alphabetical order, my fingers instinctively flew to where the next letter would reside on a QWERTY keyboard.

It took me for-freakin-ever to type in “236 Main St”. I haven’t felt that stupid since…well since I was in kindergarten learning the alphabet.

We eventually made our destination, but I am now terrified at the prospect of having to travel anywhere that requires a GPS.

I wonder if the Children’s Television Workshop has given any thought to a remedial Sesame Street for adults, because I really feel like I could use Cookie Monster’s help right now. That would be good enough for me.