Early last year, I saw a trailer for a biographical movie that recounted the love story between a novelist and his editor. For every bit that the novelist was a flamboyant, erratic larger-than-life character, his editor was a buttoned-down, controlled one. And yet, between the two of them, they produced works that sit among the sleeves of Hemingway and Fitzgerald, two of the editor’s other writers.

Last June, Genius had its theatrical release in North America, only to disappear almost as quickly. I had completely forgotten about the story, until this week, when the movie launched on Netflix.

Now, I know why it disappeared. Not because it is a bad movie, but rather because it was produced for the wrong medium.

The theatrical release Genius should have had was on a stage, not in a cinema. Although not written intentionally as such, Genius is a play.

Based on A. Scott Berg’s 1978 National Book Award-winner Max Perkins: Editor of Genius, the film recounts a tempestuous period in the 1930s when the first frenzied pages of Thomas Wolfe’s (Jude Law) autobiographical O Lost found their way onto the desk of Scribner’s editor Max Perkins (Colin Firth). It then follows the bond that forms between the two men as they fight to tame Wolfe’s creative furies, eventually honing it into the retitled Look Homeward, Angel and his sophomore novel Of Time and the River. 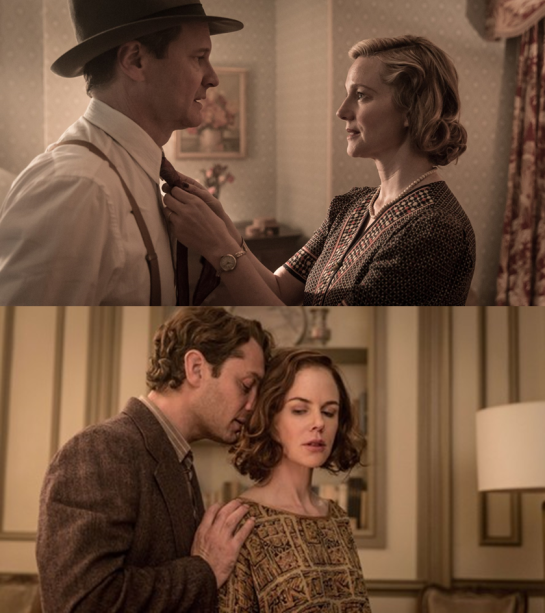 The loves they left behind: Laura Linney (top) and Nicole Kidman

The process was not without its victims, however, and as minor secondary plots, the film unveils the impact of the men’s singular focus on their loved ones: Perkins’ loving wife Louise (Laura Linney) and his five daughters, as well as Wolfe’s loving but jealous benefactor Aline Bernstein (Nicole Kidman).

As I watched the film—directed by Michael Grandage with screenplay by John Logan –I found it structurally constrained and yet exuberantly written. With the exception of links between plot sequences, every scene played out as intimate conversations with the characters largely speaking in poetry, especially Wolfe and Perkins. It was as though Logan was trying to capture the Joyce-like prose of Wolfe’s mania and cast it from the mouths of his characters.

After pausing the movie for a few moments about 40 minutes in, not completely sure what I thought of it, I came back to the film and immediately realized what was challenging me. This was a stage play that was unaware of its identity.

Once I had that in my mind, the movie proceeded to unfold beautifully and naturally.

Defining the act of falling in love

As a writer and editor myself, I was enthralled by the ongoing debates over how best to describe the emotions of falling in love and that tortuous feeling of having the words you bled to write being torn asunder with the simple stroke of a red pencil.

I understand, however, that not everyone would be as appreciative or have such a personal connection to these scenes.

The movie was eviscerated by the critics I read, and rightly so if viewed as a movie.

The Independent reviewer apparently saw what I saw:

“The acting, along with John Logan’s script, belong to the theatre.”

Like many stages plays, there is essentially no build up, and we are immediately dumped into central relationship of Perkins and Wolfe, two artists straining to make the other see his vision for the project at hand. Thus, when Kidman’s Aline or Linney’s Louise show up in the story, we are given almost no backstory to help us understand their perspectives or reactions to the intellectual love affair that blossoms.

And to the subtlety comment, Logan inserted F. Scott Fitzgerald (Guy Pearce) at the nadir of his career as an omen to Wolfe about what lies ahead, and Ernest Hemingway (Dominic West) as an emblem of a man who possessed his life, much as Wolfe tried to do and failed. 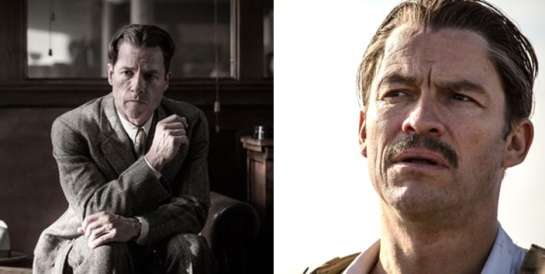 But perhaps the biggest tell for me that this was a stage play—and something that hits the subtlety debate—is the hat that Perkins wears throughout the entirety of the film. No matter where he is, no matter the time of day, no matter how he is otherwise dressed, Perkins wears his grey Fedora. It is what allows him to maintain his control on the world.

And because of its importance to Perkins—the true hero of this story—the hat is what brings power to the film’s close, in a scene that could otherwise be seen as cliché (and may yet be, by some).

The audience for Genius will be a narrow one, unfortunately. It has, however, piqued enough interest in me to look into the works of Thomas Wolfe, as well as A. Scott Berg’s biography of Max Perkins.

Michael Grandage should have stuck to his day job (The Independent) 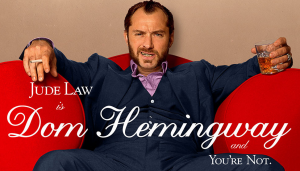 A redemption story of a career criminal who has played the game by an unwritten code, who has done his best to do right by people within the criminal world and been screwed at every turn. The only people he hasn’t done right by, in fact, are his ex-wife and daughter, whom he completely screwed over. (Trailer)

Written and directed by Richard Shepard, who brought us The Matador, Dom Hemingway works on so many levels—from its amazing opening soliloquy (no better way to describe it), through astounding montages of decadence that can only be described as balletic, to tender moments of friendship punctuated with foul language.

But sadly, because it works on so many levels, the places where it doesn’t are glaring. And there is perhaps no bigger failure than the actual story.

There is no doubt that Shepard can write. His use of words to express universal ideas and human frailty are musical. Unfortunately, those skills only serve to create islands of poetry in a story that slowly drowns in conflicting tides. The movie bogs down into little more than a series of fortunately/unfortunately vignettes that ultimately don’t go anywhere.

Likewise, the moment we leave the criminal aspects of the story and Dom has to face the wreck that is his life and relationships, the dialogue becomes wooden and cliché.

Even the redemption angle is eventually undercut by additional scenes that suggest Dom has learned little. Not sure what Shepard’s thought was here—that people don’t really change, perhaps—but it might simply be an unverbalized acknowledgement of Shepard’s own limitations.

The performances of Jude Law and Richard E. Grant cover for many of the story flaws. Law’s Dom is a man who can’t get out of his own self-destructive behaviours long enough to actually succeed and let his skills prove himself. Grant, meanwhile, plays the long-suffering conscience who just wants his friend to be happy, but doesn’t have the energy to watch Dom implode in his own fear yet again. Unfortunately, the minute these amazing men leave the screen, the movie flat lines.

(Side note: Just before the movie started, the theatre screened an ad for Filth (trailer). It was amazing how similar the lead characters of the two movies appear, as Law seemed to be channelling his inner James McAvoy at times.)

Perhaps the best way to describe Dom Hemingway is to say you will feel energized watching it, but a little empty of dissatisfied as you leave the theatre.

I wanted this movie to be better. I wanted it to be the best movie I’d seen all year, the most complete movie. Alas, it wasn’t.