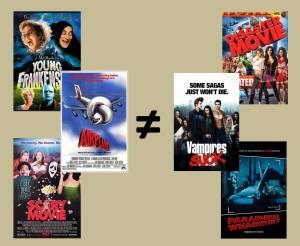 Mel Brooks is a god! Carl Reiner is a god! Carol Burnett is a god! Mike Myers is a really funny Toronto boy, who flew pretty close to the sun. (He may yet be a god, but he has to get back on his feet.)

And among their many talents, these people share the amazingly delicate talent of creating parody…a talent I have yet to seriously attempt beyond the scale of sketch comedy.

I increasingly understand why people think this as I watch more of the recent fare of parodic films that appear to have taken this equation to heart.

Last night, for example, I watched Paranormal Whacktivity, a sexed up romp through the found-footage haunted-home segment that includes films such as Paranormal Activity and Blair Witch. This film was horrific, but not in a good way…nor was it particularly funny or sexy. And it wasn’t very good as a parody because it didn’t even stick to its genre, mixing Paranormal Activity with Ghostbusters, which both involve spirits but are hardly cinematic siblings.

It was useful, however, to my understanding of parody.

When I compare Blazing Saddles, Airplane, Dead Men Don’t Wear Plaid, and Austin Powers: International Man of Mystery to Disaster Movie, Not Another Teen Movie, and Breaking Wind, I realize that the truly classic parodies have something that the new ones don’t: a strong central story.

Somewhere in the evolution of parody films, the movies became less about story and more about ripping off as many genre clichés as possible, offering no firmer links between these scenes than bad jokes, fart noises or perky breasts.

Blazing Saddles wasn’t about taking a bunch of classic scenes from Westerns and simply linking them. It was more about taking iconic characters from the Westerns and creating a classic, if twisted, story. The sheriff abandoned by the town folk, the washed up gunslinger, the evil cattle rustler, the crooked politician.

Similarly with Shrek; although this film has such a strong central story that I’m not sure whether I should even include it in a list of parodies. Yes, it played up almost every fairy tale gimmick, but the story really didn’t model itself on any given style or pre-existing story.

Dead Men Don’t Wear Plaid is another odd case. With a strong through story led by Steve Martin and Rachel Ward (directed by Carl Reiner), it takes parody to a whole new level by incorporating actual scenes from noir films within the scenes with live actors. Thus, Martin’s character may find himself playing across from Barbara Stanwyck or Edward G. Robinson. Now, that is great film writing and editing.

Interestingly, the Wayans’ brothers first entry into this genre—Scary Movie—offers another lesson about parodies: the challenge of dipping into the same well too often.

Although horror/slasher movies are not to my personal tastes, I thought the first one or two films of this series were particularly well done. But as the series continued, picking on more films from within the horror/slasher genre, it started to become a parody of itself. The jokes were no longer fresh. All the best tropes had been used up in the first two movies and so the later films just seemed to be running in place.

Six Star Wars films, one Spaceballs. That works. (NOTE: Spaceballs is one of my least favourite Mel Brooks movies, much to the chagrin of many friends.)

Even the much stronger series of Austin Powers and Police Squad films showed this sense of comedic fatigue.

The original film is a surprise. The first sequel may be enjoyable. Anything after that is milking a dead cow.

I have no doubt that bad parodies will continue to be made…if nothing else, they seem to require little writing and typically have poor production values, and are therefore inexpensive.

My hope, however, is that another Mel Brooks, Keenan Ivory Wayans or Mike Myers comes along to raise us from these creative and comedic doldrums. (NOTE: At present, my money is on Keegan-Michael Key and Jordan Peele, who have the comedic talent and the Hollywood clout to do it right.)

A few personal favourites (hyperlinked to trailer or favourite scene, where available):

Hot Shots (not so much the sequel)

Silent Movie (I may be only person who likes this one)