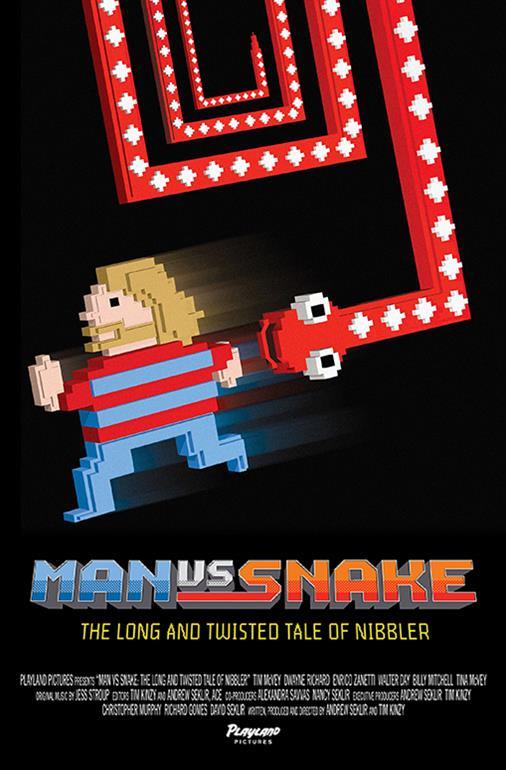 I like pinball. I played Pong when it first came out. And I can count on one hand the number of video games I have played in my life…including Pong (others involve Star Wars or strip poker).

Thus, when I was asked by a friend to review the documentary Man vs. Snake: A Long and Twisted Tale of Nibbler—recently released on Netflix—I seriously questioned our friendship. 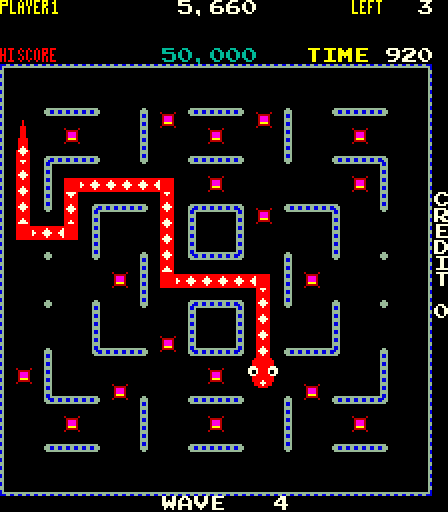 If Centipede and Pac-Man had a child

For the uninitiated, like me, Nibbler looks like the bastard love-child of Centipede and Pac-Man, and essentially involves an ever-lengthening snake that courses around obstacles gobbling energy packets while trying not to bite its own tail. In short, a joy-sticker’s wet dream and yet a game from the heyday of arcades that few knew existed.

What set this game apart from the others, however, was that its scoreboard included nine digits, so a score of one billion was possible. Yeah, this set my spine tingling as well.

The man in question is actually four men.

Back in the early 80s, teenage Tim McVey—not the terrorist, the documentary points out—played two days on one quarter and broke the billion-point barrier, under the watchful eye of local oddball and arcade owner Walter Day. Woohoo!! And for years, that was the end of the story; McVey’s singular claim to fame.

And this is where the meat of the documentary takes place…McVey’s desperate attempt to reclaim his title, and quickly coming to grips with the fact (and joy-stick) that his body is not what it was as a teenager.

Oh, and the fourth man is Canadian gamer Dwayne Richard, who kind of joins McVey’s journey as sparring partner.

As documentaries go, this one is pretty well constructed. It has a strong narrative stream in the redemption story and the sparring that becomes a bit more personal. It has strong personalities in the four men and their support networks.

It was like the movie 127 Hours, but with your hand stuck on a joy-stick rather than under a boulder.

Intellectually, I get the various stories here…the archetypes. But I cared not a single whit as to whether these guys broke the records, and therefore never invested in the players emotionally. They were simply too abstract and surreal for me to care, and the stakes were meaningless.

Note: The documentarians did a very good job of highlighting these eccentricities while being respectful of the people.

Game competitions have changed in 20 years

I understand that the video game world has completely changed in the last decade to become very much an international spectator sport. Nibbler is very much NOT of that era.

But if you want to watch a handful of middle-aged men obsess over an arcade console for 90 minutes or so, this might just be a documentary for you. 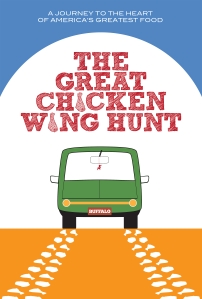 An odd movie about odd people eating an odd food

So, my friend Mike now has one more movie credit to his name than I do…largely because Mike now has one movie credit. And I would be fine with that except he has no interest in being involved in the movies. He’s a bioinformatics nerd, not a writer, director, actor, camera operator, craft services staff or any of the millions of other possible titles affiliated with movie making. It was his facility with number crunching that got him the credit.

On Sunday, I traveled with Mike to Buffalo, NY—about 2 hours southwest of Toronto—to eat amazingly greezy pizza (yes, I know I spelled “greasy” with two e’s and a z…that’s how greezy it was) at La Nova and to go watch a documentary a college buddy of his made.

Generally, I am not a fan of first-person documentaries, where the director and his or her obsession is the focus of the story. I typically find them boring as I often do not share the mania, and quickly become inured to the constant refrain of “look at me”. I am happy to report, however, that this movie was actually quite pleasant (if not perfect).

The Great Chicken Wing Hunt was the story of one man’s obsession (Matt Reynolds) to find the perfect Buffalo wing. Part history lesson, part personal pilgrimage, part gastronomic nightmare, the documentary had its humble start in the house parties of Matt (an American journalist) and his friends in Bratislava, Slovakia where Matt had introduced the chicken wing to all of his friends. Much to the chagrin of his saint of a girlfriend Lucie, Matt’s cooking hobby fermented into an obsession that led to his quitting his job to pursue the best Buffalo chicken in the world.

Now, I am personally okay with chicken wings and am a fan of the basic Buffalo sauce, which I understand to be a combination of butter, vinegar, Frank’s Red Hot Sauce, garlic, and cayenne pepper, but the idea of dragging a Slovakian film crew and a handful of chicken wing experts around New York State seems a tad ludicrous. And if the documentary is an accurate reflection of what happened on the trip, it was ludicrous. But they did it…gorging themselves on more than 4,000 wings over a 3- to 4-week span.

I won’t go into any further details of the story itself—you can find the trailer online—other than to say that it was pretty entertaining. The group approached the survey very scientifically (thus Mike’s ruddy film credit as statistician) and the debates within the group about what constituted a Buffalo wing occurred with the same earnestness one hears from people discussing Star Wars, Star Trek or which Dr. Who was best.

As one might expect from people eating chicken wings of various heats and flavours for breakfast, lunch and dinner, the search also became a social experiment that slowly grew reminiscent of Lord of the Flies, as Matt dealt with issue after issue, grumble after grumble from crew and wing-nuts alike, not the least of which was his increasingly uncertain girlfriend Lucie. Nicely, though, the film never descends into the reality gong-show it could have…the focus is always on the wings and the search.

If you get the chance—even if you have no idea where Buffalo is, what a chicken wing is (aside from the useless appendage on the bird) or why anyone cares—you should give yourself an opportunity to enjoy a gastronomic giggle at Matt’s expense. 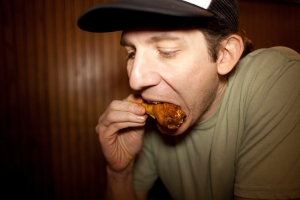 Director Matt Reynolds put his stomach where his mouth is