It was my nightly ritual, lying in bed in the dark listening to the radio.

Still in high school and living at home, I had finally exercised some autonomy by moving my bedroom to the basement of our townhouse, two full floors from the rest of the family. It was my sanctuary, surrounded by my books, my mattress resting on the floor, the sounds of Toronto’s 1050 CHUM filling the room, disturbing no one.

The music stopped, as it often would for commercial breaks, but this time for a news announcement. Odd for this time of night.

“Reports are coming in that John Lennon has been shot and killed outside of his Dakota apartment in New York City.”

The air then hung silent—for a moment, a minute, an hour, I can’t say for certain—and then the room filled with the simple piano chords that start the song Imagine.

I knew of John Lennon, at that point in my life. Knew his songs from years of listening to the radio.

And I was well aware of The Beatles; from their music, their movies and even the lesser remembered cartoon series of my childhood.

But where my awareness of John Lennon and The Beatles had been a passive thing up to that dark night of December 8, 1980, something changed in me upon learning that Lennon was dead. A fire to understand, to turn my awareness into knowledge, to experience more kindled inside me, overtaking me.

The world had lost a beautiful, elegant poet who I was later to learn could also be a fragile, ego-centric asshole.

The world had lost a magnificent artist who stood atop a mountain of pain, grief, anger, vindictiveness and sorrow.

And in a Lennon-esque stroke of irony, the world had lost a man who had finally come to grips with his frailties, who had finally learned to express love and not just demand it, who could offer his talents to the world as a gift and not a response.

Although at times I found myself worshipping John Lennon as a god, I now remember the artist as a man.

Later tonight, I will play Imagine and I will remember.

Life is what happens to you while you’re busy making other plans.

There is a thing going around Facebook these days—electronic chain mail, really—where friends invite each other to list the 10 books that have stuck with them through life. Thanks (??) to my friend Nancy for inviting me to participate.

The Complete Works of William Shakespeare

Since my first introduction to the works of the Bard in Grade 9 (Merchant of Venice) through my many pilgrimages to The Stratford Festival in Southern Ontario, I have been entranced. No matter what is going on in my life, I find solace and refuge in the pages of the Master’s folio. Favourite play: Henry V. My lone tattoo: Julius Caesar V.v.73.

His life was gentle, and the elements

So mix’d in him that Nature might stand up

And say to all the world ‘This was a man!’

For such a short book—and particularly within such a long series—this is a novel I return to on a regular basis. The story is woven so tightly and yet offers mythic proportions. The language is at once simple and profound…and incredibly quotable. Every time I read the story, I find a new interpretation.

I must not fear. Fear is the mind-killer. Fear is the little-death that brings total obliteration. I will face my fear. I will permit it to pass over me and through me. And when it has gone past, I will turn the inner eye to see its path. Where the fear has gone, there will be nothing. Only I will remain.

To a budding geek, this book and the next on my list were manna from heaven. Although I was a fan of Asimov’s fiction, I found a home in his look at various subjects in science (and eventually theatre and religion). He explained the universe to me in a way that no one else could and gave me the tools to extend that learning to others (whether they wanted to hear it or not).

While Cosmos was the book (and television series) that everyone else was talking about, this was the book that first grabbed my attention. Like Asimov, Sagan had a way of contextualizing science that few others have mastered, offering not just a series of facts, but the stories of the people behind those facts, including the dearly departed Paul Broca. Asimov and Sagan likely influenced my decision to move into science writing.

If not for my abhorrence of discomfort, I would be living on the Canadian tundra today, studying and communing with the wolves. That’s how powerful this book was to me. Many criticize Mowat for fabricating many elements of his non-fiction and particularly in this story, but I don’t really care because he grabbed a young mind (mine) and transported me into the minds of the wolves he studied for the Canadian government. To see these creatures as more than just vicious wild dogs was life-changing. 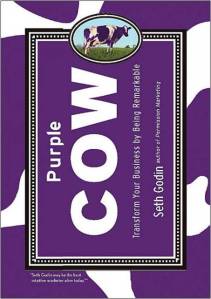 Drive past enough farm fields filled with cows and eventually you cease to see them. Drive past a purple cow, however, and you stop. In short, the premise of a book of blog entries that challenges the reader to skew their view of the world with an eye to drawing the attention of your audience. Less an epiphany than a confirmation of what I already believed, Purple Cow told me there was merit in my mania. 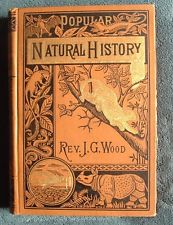 Published in 1885 (my edition), the content of this book is not only dated (it includes a discussion of the dodo), it is often outright wrong. But it holds a special place in my heart because I received it from my great-grandmother and it initiated my fascination with antiquarian books, something that continues to this day despite my inability to financially support it. These books—particularly the non-fiction—open a portal into another time and another way of thinking, much as the rest of my book collection will in 100 years.

The murder of John Lennon in 1980 took what was a passing awareness of The Beatles and turned it into an obsession for me. I had heard the music, I had seen the movies, but I was completely unaware of their context. Thus, the biography of the Fab Four, written by insider Peter Brown (…called to say, you can make it okay, you can get married in Gibraltar, near Spain), blew the lid off my ignorance, pouring kerosene on a flame that has not died in the intervening 34 years.

The Elements of Style – Strunk & White

As a writer and editorialist (I will not call myself a journalist…different craft), you might suspect that this book is close to my heart because it helped me become a better writer. And you would be DEAD WRONG. Just the opposite, in fact.

Instead, this book informed me that my new Editor had absolutely no respect for my writing nor that of my writer/editor colleagues. In our first staff meeting, she cheerfully told us she was looking to make some changes in our magazine and then gave us each a gift of this book. In my eyes, it was tantamount to handing Dostoyevsky a first-grade reading primer and suggesting he rewrite Crime & Punishment in the format of Mr. Whiskers (no self-aggrandizing hyperbole intended). I moved on. 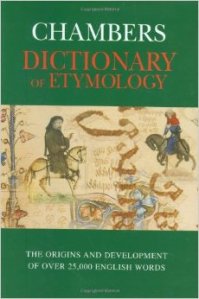 As a word-jockey, history-buff and all-around geek, I can never be sure if my wife’s gift of an etymology book was a reward or a well-disguised pun-ishment (the hyphen should give you a clue as to why she would punish me). Regardless, the book has served me well as I endeavour to sculpt language to fit my needs, crossing words at their roots to develop new varietals that colour an otherwise mundane existence.

I love what I do.

I love writing. I love coming up with new ideas to write. I love helping other people put their ideas into words and then into action.

This is why I struggle with one of the shorter words in the English language: No.

Hello, my name is Randy, and I am addicted to new projects.

There was a time when my inability to tell people no stemmed from my fear of letting them down. Or more accurately, my fear of them never asking again and my value as a person being reduced to zero.

Not so now, luckily. Now, I find my value internally. I am, therefore I have value.

Interestingly, though, I still struggle to say no. But now, it’s a curse of enthusiasm and confidence, now fear and self-loathing.

And to complicate things further, that same enthusiasm and confidence attracts people who are more timid in one or both. People with ideas but lack voice, or with voice but lack means.

I am glad that they see me as a vector through which to explore and advance their visions. At the same time, I have to remember that my bandwidth is limited. It is less the hours in a day and more the daily ration of creative energy that limits me.

(BTW, this is why I don’t upbraid myself for spending hours on the computer or playing Solitaire. That is my period of recharge.)

At some point, I have to limit my involvement in others’ works. I have to save enough space for my paying gigs, lest I be hungry and homeless, and for my creative projects, lest I be frustrated and unhappy.

You recently published a book and want to turn it into a screenplay? Great!

You’ve got an idea for a comedy sketch event? Fantastic!

I came up with another great concept for a movie? Congratulations! (Yes, even I drain my batteries.)

I’m not saying I won’t help, but don’t take it personally if I limit my involvement. It is not a reflection on you or your idea but rather on me and my limitations.

Today, I can work with you. Tomorrow, I may only be able to listen to you. The next day, I may not even be able to do that.

Oh, and I’ll do my best to recognize and respect those same boundaries in your life.

No doesn’t mean your idea sucks. No doesn’t mean I never want to work with you. No simply means I can’t, not right now, no matter how much I might want to. There are shades of No.

But I wish you all the best in your efforts.

In a slightly unrelated brain fart, the concept of No reminded me of one of my favourite revelations from the movie Yellow Submarine, the animated Beatles film.

Late in the movie, when the Beatles—disguised as Sgt. Pepper’s Lonely Hearts Club Band—lead the people’s revolt to reclaim their land, the smashed letters reverse and become colour again.

What surprised me was that having watched the film at least a dozen times before, it wasn’t until late in my “adulthood” that I realized the message embedded within the two events. 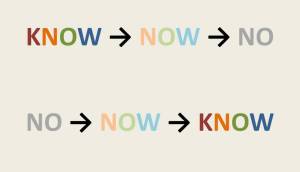