I just read a review of the new movie The Incredible Burt Wonderstone and one of the complaints is that the lead character, the one after whom the movie is named, the protagonist is completely unlikeable. As the reviewer states about the seminal moment in the movie, “it’s too late for Burt or the movie to win back audience affections, on or off the screen.”

This highlights a problem I find in a lot of movies right now: there is nobody to like or cheer for.

I appreciate that this is all personal opinion and tastes differ. What I will write next may totally rankle with your own opinions. Cool.

In too many movies I see of late, I walk out of the theatre dissatisfied because I could find no one for whom to root. And for me, I need to root for someone when I spend time with a story.

Stoker? I found none of the characters likeable or in any way redeeming.

Prometheus? I want them all dead at the end. The closest I came to cheering for anyone was the robot.

I understand that the root “proto-“ means leading or first rather than in favour of and so each of the main characters of these movies fulfills the role of protagonist, but that doesn’t make me any happier with these films.

Hell, in the two films I named above, I couldn’t even cheer for the antagonist, as I did with Alan Rickman’s character in Die Hard (I’ll never be a Bruce Willis fan).

Decades ago, anti-heroes became all the rage (think Clint Eastwood in practically anything), and I thought that worked well. Unforgiven was a great movie.

But somewhere along the line, the world-cynical smarm of the anti-hero turned into two-dimensional self-absorbed slime.

Yes, we are supposed to see the protagonist fall a few pegs as their world collapses around them only to watch them triumph (or not) in the end. If I like the character, my heart bleeds for them at every crisis, at every moment of conflict, whether internal or external.

If I don’t like the character, however, I either don’t care about their knocks or I take sadistic pleasure in it.

On some level, I think it’s lazy writing. Rather than find interesting ways to show the internal humanity of the protagonist through a cloud of jack-assedness, the writer bets the farm on swaying the audience with a massively redemptive climax, where the protagonist makes some life-altering self-sacrifice and does the right thing.

As the reviewer above alludes, however, the writer runs the risk that it’ll be too little too late.

As I play with my camera, empirically learning its ins and outs, I find pleasure in capturing different moments of natural light.

On my trip to Hawaii last year, I managed to capture some nice shots that really highlight, I think, the wonders of the sun (or other suns) at the extremes of the day.

Morning light in Kailua-Kona has almost an ethereal quality, especially when combined with waves.

As sunset approaches, it was fun to play with silhouettes that just barely capture the colours of the leaves. 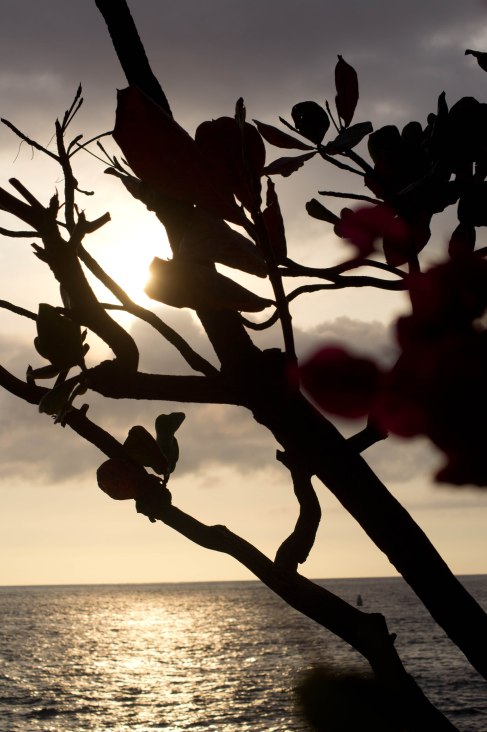 With dozens of other hotel patrons, this girl sat patiently waiting for that perfect sunset moment. Her face had some quality that just made me want to keep taking photos of her.

And so I did, until I started feeling stalker-ish. This is my favourite of the group for the way the reddening light plays with the colour of her hair.

Photography mentor and friend Sam was a great target as the sun sets on his balding pate.

Another favourite, sunset on Mauna Kea. The colour strata were amazing and being above the clouds means not having to worry about poor photo conditions.

Go to paradise and freeze your buttocks off. Astral photography from near the top of Mauna Kea. This was a 30-minute exposure. I wish I could say I planned to get an almost perfect wedge of rotating space (okay, rotating Earth) but I got lucky. 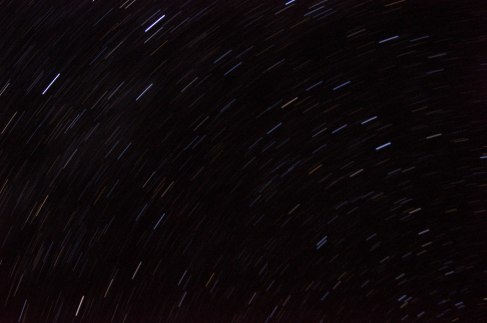 Well, it’s now been a full week for my new blog, and I wanted to thank everyone for their interest and support.

36 of you, in fact, have gone so far as to sign on to follow my blog, which is quite thrilling and humbling…I shall try not to disappoint.

I don’t know where I am going with this blog, but I know it will be an adventure, and I very much look forward to hearing your feedback. Not just your likes (which are lovely and appreciated), but also your thoughts and impressions on what I have written or photos I have posted.

Do they stimulate ideas, do you disagree, do you have suggestions on improvements?

I want to hear it all. I want to engage, not just entertain or bemuse.