The summer of 2012 was an amazing time to walk the streets of Toronto, camera in hand. The weather was gorgeous–most days providing incredible sun–and the temperatures never got uncomfortable for human or beast. Life abounded in profusion.

The following are some shots I managed while meandering my way along the Toronto waterfront. I didn’t have to wander too far to get some interesting photos.

Snack time at Lake Ontario (not sure I’d want to put my head down there, but okay)

They were blinding in the afternoon sun

Just a little more to the left…

The diaphanous fragility of this bloom blew me away

Too many ducklings, too little shade, so mama helps out

Ready for take off

A dust bath for one of the local sparrows

Bees swarmed in profusion this summer

Have you ever been in an argument with someone and realized that you’re not really arguing about the topic at hand? Reacted emotionally to an event or a person’s actions but not understood why?

We are the baggage we carry. We see everything in our universe through the lens adjustments of past events.

This can lead to problems—toothpaste in the sink upsets me not because there is toothpaste in the sink but because it is merely the latest in a string of actions that prove my feelings aren’t important to you—but it doesn’t have to. I can well up on the subway watching a young person being kind to a senior citizen. That ocular moisture isn’t about them; it’s about my life with my grandmother.

What’s true for you is also true for the characters you create. Long before they showed up on a page in your screenplay or novel, each of your characters led a life. And that life shapes—or should shape—every response and reaction your character has throughout the screenplay.

You’ll hear people—particularly actors—talk about back story. What is this character’s back story? But to me, baggage is a much more appropriate term because I think it speaks so much more to their motivations in life.

Stephanie and Margaret both come from middle-class white homes in the suburbs. They are the same age, are both actors, went to identical schools, have working dads, stay-at-home moms, and two younger siblings—one male, one female—in college. They have the same back story. What about baggage?

Stephanie’s family believe that if you can achieve, you can over-achieve. Success is everything. And while they support her acting career, they really don’t get it. Her brother is studying medicine. Her sister, law. Stephanie was expected to lead by example.

Margaret’s family believe that if you can achieve, you can over-achieve. Success is everything, but it comes from within, not from without. They support her acting career, and even if some of them don’t get it, they’re happy for her. Her engineer brother and biochemist sister come to all of her shows.

In your screenplay, Stephanie and Margaret are on their way to an audition. Both carry coffees through a crowded Starbucks and spectacularly collide, coffees spewing everywhere. How will each react?

Baggage deepens a character. It makes them more real and more sympathetic to the reader or viewer. It subconsciously informs their decisions and their word choice, ideally without dialogue that is completely on the nose (e.g., “Agh, this is like that time in Kapuskasing with my dad!”).

Baggage is indispensable to subtext.

If your character is well-written, the audience should be able to identify his or her baggage and be pretty close to what you were thinking. Although, if they come up with something completely different, they may be pointing out something in you of which you were not aware, which can also be exciting.

As writers, we find it hard enough coming up with the events within our story. For some, the idea of coming up with events and interactions before our story may seem to be extraneous work for no benefit. Without baggage, though, you run the risk that all of your work will have been for nought.

And let’s face it. A story is a journey, and when have you ever gone on a journey without at least a little baggage?

Part Two: Knowing your character’s baggage isn’t enough, in and of itself. You also have to make sure you weave that baggage into the page.

The essentials of my baggage in Costa Rica. 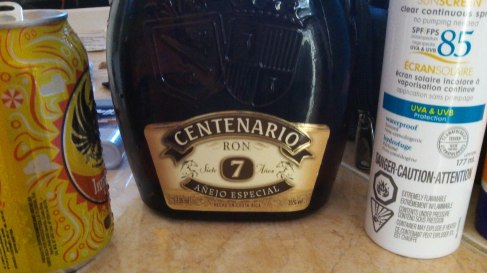