I also hear living people, imaginary people and people who aren’t even people.

I am a writer, and I am highly confused.

Since quitting my day job to commit full-time to writing, I have found the voices that run rampant through my head have amplified, in volume and seemingly in number.

Before I quit, the anxieties and activities of daily living dampened the voices, shoved them to the periphery, surely as a functioning if not coping mechanism.

Now, without those distractions, the voices push outward, stretching their muscles after years of confinement, exploring their new world with the glee of a four-year-old on a steady diet of Coco Puffs. And here I sit, trying to control or harness them, sticking my pinky in a fire hose opened to maximum flood.

I have so many stories to tell, to record, to witness. But as soon as I sit down to transcribe one, a dozen others poke their heads out of the ground; conceptual prairie dogs wondering if the coast is clear.

I’ve always believed that creativity breeds creativity. I am experiencing that in spades, these days.

I will admit that after so many years of holding it back, part of me wants to let the voices flow unchecked. I want to stand at the foot of the waterfall and let the deluge wash over me, cleansing the grime of repressed enthusiasm from my soul.

But at some point, in some way, I still have to function in this universe. I want to recount these stories to someone, and for them to be intelligible, I have to direct my journey through the eddies that buffet me.

I hear voices. And I struggle with how to deal with them all.

At times, the onslaught of voices is one more wave than I can handle. (Photo taken at Carilla Beach, Costa Rica)

The building stands along the rue de la commune,

A sentinel on the waterfront of Montreal.

A few tourists walk by and the silence of morn

Is broken by the clack of cobblestones under the hooves

Of a horse pulling a caleche;

But the building is mute and observes.

It wears the marks of its hundred and fifty years

And hearkens back to Dickensian times.

The brick no longer white but stained

With the soot and rain of life in the city.

The windows are small, clouded irises

Through which pass the events of history.

The doors of the loading docks have been long painted shut

But the wood bears the scars of wagons poorly maneuvered.

She is a silent witness.

The wind blows ever so gently on an autumn’s morn

And the breeze passes the cracks and crevices

Of the wood and brick.

If you listen closely, you can just make out

The echoes of yesterday.

For being too careless with today’s papers

As they toss them into the backs of waiting wagons;

Threatening that the cost of bundles too damaged to sell

Will be deducted from their wages, mere pennies,

A meagre mouthful for the hungry families.

As your eyes scan up from the street

And you pass the windows,

You can see the signs of former residents.

Amongst the jumbled letters of words over words,

Signs painted over signs, you can still make out

The once proud letters of

A car drives by and the rhythmic beating

Of its wheels on the bricks echoes against the building;

Reviving the forgotten sounds of a printing press

Bringing the news to thousands of Montrealers.

Your eye continues skyward to a large bay window

On the top floor and you are startled by a reflection.

In the early morning sun, the light glints

And a spectre appears behind the panes.

Still stands at his window, looking out over the river,

From his office and apartment above the presses.

The throb of the machines is a lullaby for the old man;

A mother’s heartbeat in the womb

Formed by the newspaper’s walls.

He smiles as he listens to the rantings of Gilles Garnier,

The foreman of the dock, remembering him

As an eager young lad who delivered the paper

For a much younger O’Toole

When Canada and The Standard were new.

These windows and this paper have been witness

To the founding of a nation,

Its history both ancient and new.

The presses have described the rhetoric of politicians,

George-Etienne, Wilfred and John A.,

Arguing the desirability of a union, a confederation.

It has announced the call to arms of Canadian boys

To fight for British guns in the fields of South Africa

And told of the death of a mighty monarch, la reine Victoria.

She has counted the bodies at Vimy Ridge

And, from these windows, has cried with joy

Of the end of the “war to end all wars”,

Only to weep at the start of the next one.

She called for calm on that infamous black Tuesday in October

And was instrumental in the programs to feed and clothe

The poor in its aftermath.

But now the building is silent,

A victim of post-war modernization;

A derelict in a sea of decay, the city fathers calling

For yet another committee to decide its fate.

A cloud crosses the sky, disturbing the light,

And O’Toole vanishes from the window.

The breeze dies and the Frankish rantings subside.

The presses have stopped and are long gone. 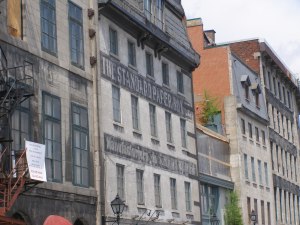 With the passage of time, Montreal’s history fades into dust.

I am hoping to a more complete write-up shortly about the sessions I attended at the Toronto Screenwriting Conference this weekend, but here are some personal highlights/insights from today’s sessions.

Be your own writer: Mazzara shared his earliest experiences in starting as a writer and he said that in the early days of his career, he tried to write things that he thought screenplay readers wanted to see, but that ultimately, this was a failing approach. In his eyes, you have to write topics that reflect and come from you. Things that represent who you are and in what you are interested.

Making sense of your characters: He also offered an interesting tip on how to make sure the emotional/story arcs of your characters make sense. He suggested approaching it like an actor, whom he says is only interested in and therefore reads his own lines. Move through your screenplay, tracking only one character at a time—ignoring all others—and see if their progress makes sense. Are they angry in one scene and suddenly laughing in the next? Does that make sense? It’ll also allow you to tighten up their dialogue, he says. You then do this for each character in your screenplay to ensure each tracks correctly.

Too often, we only explore how a character responds to outside forces (masculine heroic). For a character to be whole, Marks says, we must also examine what is happening within a character (feminine heroic).

At the beginning of a story, the character receives the external call to life and responds by striving for a goal. But to do this, she says, the character must sacrifice other aspects of themselves that will slow or stop their progress. This sacrifice is not without a cost and the internal psyche suffers a wound because part of it is no longer valued.

Unfortunately, the problem with striving is that it is doomed to failure—we can’t ever achieve enough of our goal. A crisis of faith occurs in the masculine self, that triggers an awakening of potential in the feminine self—internal fortitude.

Externally, the character falls as the call to life becomes a battle for life as its illusions are shattered, and when the outer self becomes vulnerable the internal self is emboldened and can heal the wounds, turning pain and suffering into creativity and love.

Thus, it is the sacred marriage of the internal and external selves that allows the character to discover its true self.

David Hudgens – Breakdown of the One-Hour Drama (showrunner of Parenthood)

On receiving notes: The most important thing about receiving notes on your screenplay is understanding what’s the note behind the note. The note itself is often directed at something that may be relatively minor, but in its essence, it speaks to a deeper issue in the writing. Look for that essence.

Writing screenplays ≠ making movies: It is entirely possible to have a good career writing screenplays for movies without ever getting any of your movies made. It’s a numbers game, as studios constantly contract out for hundreds of screenplays, hoping that at least one of them will turn into a profitable movie, but they can’t afford to make all of the movies to find out.