So, it seems to be the season of the sparrow this year as they were out in profusion across Washington, DC, although the starlings did their best to make an appearance or two.

The hardest part about getting some of these photos was keeping vacationing children on the Washington Mall from scaring potential subjects away.

With the wealth of dried twigs and grass, she was often very difficult to find

The meeting will now come to order

Beautiful plummage for such an annoying bird

Get in ma belly!

She was so serene and beautiful, she just begged to be photographed

Ahhh…so close to being an amazing photograph!

These two hopped around each other for quite some time, so I’m assuming they’re bonded

Like a film about the Serengeti, this puddle quickly became something of a watering hole for the locals

It was bath time for this eager little starling

A second before I snapped this shot, her buddy had dived into the can

I really wish the lighting could have been better, but he was determined to get something from that branch elbow

In Part One, I talked a bit about the challenges of asking for and receiving feedback. Below, I offer some thoughts on how to resolve some of those issues, but again, want this to be an open discussion.

When to ask. Feedback can be valuable at any stage of an exercise, but the type of feedback you need will change as your work progresses. Out of the gate with draft one, you really just need to know if the story works. After that, you’ll begin to explore things like character arcs, scene/event order (plotting), etc. Give specific direction on what you want from the reviewers.

Whom to ask. Ask for feedback from people whose sensibilities and/or writing you respect. If they think in a manner that attracts you or write in a style that you find interesting, then they are more likely to give you feedback that meshes with your goals for your work. As your skills mature, you can venture further afield and test yourself against people who think significantly differently from you.

Give direction on what you want. If you simply give someone your work and ask them to let you know what they think, then you deserve what you get. Ask for their thoughts on specific aspects of your writing so that they can focus on just that aspect. Alternatively, tell them what you worry about and let them interpret how to give feedback to address that need.

Ask questions. When you receive feedback, don’t simply say thank you and then go read it in a corner, deciding whether to commit hari kiri. Make sure you understand their feedback so that you know how to use it. It may be that they have totally misunderstood what you have tried to do—which is itself something to look at—so the specifics of their feedback may be of limited use.

Think about the feedback. In some cases, simply incorporating some feedback will make sense; however, you generally want to see what the feedback is telling you at a broader, more basic level. Does all the feedback come down to the same one or two things? For example, if a lot of the feedback is asking why your characters did certain things, then maybe the bigger issue is a need to more deeply or transparently explore character motivation. Not an easy task, but ultimately more rewarding than simply explaining away the why’s through exposition or on-the-nose dialogue.

NO FEEDBACK IS GOSPEL. If a burning bush offers you insights on your project, always remember that this is just one plant’s opinion. The smouldering conifer a few feet over may have totally different or contrary suggestions.

Don’t rely on one source of feedback, as it will include personal biases that may not be germane to your work. And even when you get feedback from multiple sources, look for patterns in the feedback. If 70% of people have issues with your climax, it’s probably time to review your climax. If, however, 30% don’t get your antagonist, you may want to look at that, but it’s not a priority.

This is also why it is important to request specific feedback. If 10 people give you 10 thoughts each and none or few of them overlap, you have no idea what is important and what is personal taste.

Remember who’s in charge. This is your work and you should be prepared to defend it while being open to ways to improve it. You DO NOT have to incorporate feedback you get. You may feel it’s off base, doesn’t really fit with what you were trying to do or the story you wanted to tell. Fine. Stick to your guns (or weapon of choice). Just because you asked for the feedback, doesn’t mean you have to take it (not even mine).

Tell your story, your way.

As my first and only tattoo, I wanted something that spoke to how I wished to be remembered

Feedback is always difficult, or it should be.

When a sound system suffers feedback, it is a loud resonant noise that increases in pitch as it slowly and achingly bores a hole into your head. Feedback on a piece of writing (or any other piece of art) can feel very much the same.

Unlike the sound system example, however, feedback is vital to the survival and improvement of your art. It will help you understand the places in which people struggle to see your vision. But just as importantly, it helps you see where your efforts resonate—in a positive way—with your audience. The challenge is understanding how much weight you should put on the feedback.

When we first start writing, we tend to wait forever to ask for feedback, often for fear of being told our work sucks. And when we finally do receive feedback, we take all the negatives to heart and may never hear the positives. We then destroy our work by either shelving (deleting) it or by trying to incorporate every piece of feedback into the work. The latter effort results in a work that is either a complete mess that makes no sense, or worse, reflects the tastes and preferences of the person providing feedback and not us, the artist.

We also tend to ask the wrong people for feedback—friends, parents, partners—perhaps in the hope they’ll be gentle with us. Unfortunately, these people don’t tend to have experience with this kind of thing—the “but I know what I like” syndrome—and so the feedback runs the brevity gamut from “I really like it” to “I’m not sure I get it”, none of which is particularly useful or informative.

As we mature in our writing, we may ask a larger number of people to review our stuff, but then we run into the problem of conflicting opinions. And as with the eggs in one basket scenario, we may try to please everyone with changes—destroying our own voice—or simply shelve the whole project. There’s also the possibility that we’ll take the attitude that everyone’s crazy and we’re brilliant, but that doesn’t happen very often at this stage.

We still may not be asking the right people, but we’re more likely in the right ballpark, focusing on other writers. If those writers aren’t at our level or higher, however, the feedback we receive will be helpful but probably won’t get us to the next level. Nobody’s fault. They just probably haven’t developed the critical skills needed to help us find not just challenges but also ways to solve them.

So, what’s a poor writer to do?

In Part Two, I’ll offer some thoughts on how best to approach the challenge of asking for and receiving feedback.

I want this to be an open conversation, however, and welcome you to contribute your experiences or thoughts to the conversation as well. 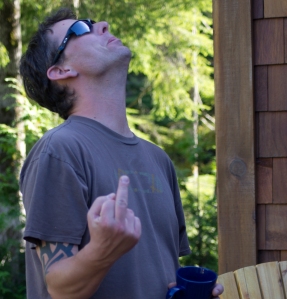 My brother has his own way of dealing with feedback, but he’s a pretty good guy nonetheless.