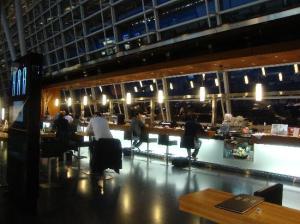 “Still there,” Lucy smiled. “They look like hell, but they’re there.”

“I thought the hurricane took everything out,” Jeremy replied.

“Actually, the ice storm in February did the most damage. About half the trees split at the trunk, so the whole copse leans to the left.”

Jeremy smiled at her, eyes alight.

She slapped his arm, causing his rye and coke to splatter. She mopped the mess with her napkin as he licked the alcohol from his fingers.

“Well, it’s hardly a forest. There are what? Twenty trees?”

“Sounds right, from what I remember.”

Lucy sipped at her straw, taking in the new Jeremy as she took in her iced tea. He had come a long way from the torn jeans and sleeveless sweatshirt she remembered from school.

Truth be told, she too was a long way from the matching couture of her younger days, knock-off Gucci and Prada long replaced by Mommy and Dadda.

“Nothing that sexy. No Darryl Hannahs in my life. Although, I am okay with greed…within reason.”

“Might as well be Albuquerque for all I get to see the city,” he replied. “Most days, I sit in boardrooms watching people talk to tape recorders and then reading transcripts of the same conversation to verify the transcriptionist isn’t an idiot or deaf.”

“Seriously, if I wasn’t charging $750 an hour to play Tetris, I’d go back to bicycle repair.”

“I’m sorry. I should have said anything about the money. Sounds like I’m bragging.”

Jeremy’s smile faded, triggering a flicker of self-consciousness in Lucy. She put her hand on his.

“Tell you what, you can buy the drinks,” she said, trying to make light of it all.

He smiled, and they fell silent for a moment.

Jeremy swished the ice around in his glass, attracting the bartender’s attention. Jeremy shook his head at him.

“Yes, boy and a girl,” Lucy said, jumping at the change in conversation. “As well as three dogs, a cat and a goldfish that just won’t die. Don’t believe them when they tell you goldfish have the lifespan of a toilet flush.”

“That’s quite the menagerie,” Jeremy responded. “You hear about a big rain storm I should know about?”

“No,” Lucy giggled. “Besides, Dave would look terrible in the long white beard.”

“Yeah,” she replied. “Has a John Deere dealership in town. He’s stable.”

“Stable?” Jeremy chuckled. “Not the most ringing endorsement I’ve ever heard.”

Now it was Lucy’s turn to go quiet, adjusting her jacket below the bar.

Lucy poked at her ice cubes, searching her thoughts for her next words, as Jeremy waited. Something told him, she was actually glad to talk about this.

“Dave’s a good man. A good father,” she explained, adding quickly, “And husband!”

Another moment of silence.

“The best man I could ask for…in Bedford”

Jeremy waited. Lucy would continue when she was ready.

“I don’t know. Maybe I expected too much after high school…” she faded off into her own world.

Finally looking up, Lucy realized Jeremy was watching her, eyes full of concern. She laughed at herself.

“We all have skeletons, eh?”

“And some of them come with mortgage payments.”

“Attention passengers of US Airways flight 7783 to New York. We are now boarding executive and elite status members at Gate 61.”

Jeremy removed his boarding pass from his pocket and threw a $20 bill on the bar.

“Sounds like that’s my cue,” he said, rising to his feet.

Lucy stood, giving him a quick hug, which he returned, not releasing her right away.

“You, too,” Jeremy replied. “Give my best to Bedford.”

Lucy remounted her bar stool as Jeremy grabbed his bag and headed toward the concourse.

“I didn’t think you liked me.”

Lucy blushed as he dissolved into the crowd.

(Image is property of owner and is used here without permission because I had to fly.)