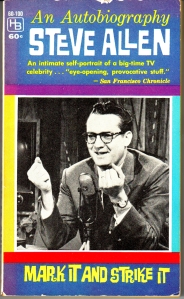 So, as I was waiting to join my friends in a taping of our sketch comedy show SomeTV!, I decided to check out a nearby second-hand book store.

Under normal circumstances, this would be a complete love-fest for me, but as funds have been a tad tight lately, I was really only in the store to browse (yeah…that could happen). Well, as I moved through the section of film and television books, I happened across an autobiography of Steve Allen, who among other things was the first host of The Tonight Show.

As I had nothing but respect for Allen’s comedic timing and his ability to get amazing, ad-libbed comments out of pretty much anyone, I picked the book up only to see that they were only asking $2.99 for the book, entitled Mark It And Strike It.

Despite this price being five times the cover price of the book, I decided I could afford the few dollars and bought it.

Wow! Was I in for a surprise!

That Allen manages to include information about his childhood, marriages and early jobs is the only reason that this volume could ever be called an autobiography. The reality is that a full two-thirds of the book are dedicated to a vast range of subjects that reflect more Allen’s thoughts on and opinions about the world in which he lives in 1960 (yes, the book is three years older than me).

Allen discusses the vast gulf that separates Art from Science. The loss of spirituality, or perhaps more accurately, the misappropriation of spirituality in the United States. McCarthyism and anti-Communist terrors that permeated society. Issues of racism and sexism that were tearing the country apart. The nature of humour and comedy and its tortuous demise at the hands of populism.

Aside from my surprise at finding such topics in an autobiography and in the ideas being expressed within the pages, the greatest reflection came as I reached the end of the book and realized that almost 55 years later how little has changed.

There is still rampant use of God and Jesus as weapons across the United States in defense of excluding other cultures.

Admittedly, anti-Communist sentiment has subsided as Communism itself has subsided, but it was quickly replaced by anti-Muslim sentiments.

One need only look at the leadership of the United States and the parasitic pundits to realize that racism and sexism still cling like so much fecal matter.

And the recent controversy over the Colbert Report shows that satire and wit remain under constant attack.

Yes, this was possibly the most effective $2.99 I have ever spent in my life as it gave me more than a few hours of entertainment…it gave me a never-ending stream of subjects to contemplate.

(PS This is not intended as a comment on the United States as we have more than our share of problems in Canada. I simply discussed the US as that was Steve Allen’s context.)

For more about Steve Allen, check out these links:

Steve Allen’s Man on the Street