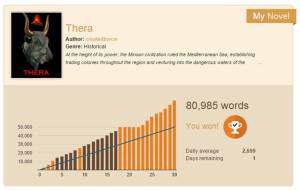 This year, I participated in my second NaNoWriMo (national novel writing month) competition, although the word competition is a bit of a misnomer but love-fest sounds a bit Sixties.

The last time, about three years ago, I got about a week into it before the realities of life interfered and everything stalled. This year was different.

While the realities of life have generally been pretty easy on me, I did have two solid weeks of distractions in the middle of November (yay, paying distractions) and still managed to reach the goal of 50,000 words by my birthday near the middle of the month (and while on the road).

Unfortunately, because I have never met a 50,000-word story that couldn’t actually be 200,000 words, I am not yet at the end of my story or my novel and so continued to type actively for most of the rest of the month to finish the competition/love-fest/creative circle-jerk just shy of 81,000 words.

I want to pat myself on the back for getting this far (and eventually, I will) but the problem is that having gotten this far, I want to reach the end of the novel, and so on December 1st, 2014, I begin what can best be described as Mo’NaNoWriMo.

And if I’m still not finished by New Year’s Eve, then I shall welcome in the New Year singing:

Thanks to all of my friends who have been so supportive throughout this process…especially those of you who have no idea what I am doing or why.

Let all y’all know how it goes!

At the height of its power, the Minoan civilization ruled the Mediterranean Sea, establishing trading colonies throughout the region and venturing into the dangerous waters of the Atlantic. But unknown to its rulers and priests, the Earth itself was planning an end to the empire; an end that centered on the tiny colony of Thera, the present-day island of Santorini.

The story Thera bears witness to this cataclysmic end through the eyes of a young Mycenaean boy Patroclus, taken from his simple village on the coast of Greece as unwilling tribute and slave into the Minoan court. Patroclus quickly learns the machinations that hold the Minoan world together, but just as he recognizes his opportunity for escape, his world is threatened by Nessa, his Minoan Master’s daughter who sees something special in him.

The clash of cultures takes second stage, however, as the world itself begins to change shape. Only Patroclus seems to be aware of the scale of the omens, adding urgency to his survival plans and conflict over how to deal with Nessa.

See also: Thera–Describing the end of a world

3 thoughts on “NaNoWriMo words than I expected”