University grad Xingyi Yan, 21, has taken a placard to the street in a bid to land a job in advertising or marketing. (Credit: MARTA IWANEK / TORONTO STAR)

This past week, I read an item in The Toronto Star about a young university graduate who was finding it difficult to get a job. To highlight her availability, she took to standing outside Union Station, Toronto’s main transit hub, wearing a placard.

She’s hardly alone, unfortunately, and I applaud her moxy for putting herself in the middle of the pedestrian business traffic, but I question how effective her plan will be. 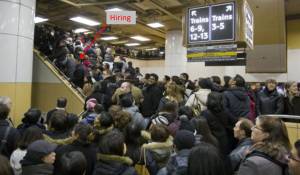 More than 99% of the people walking past her every day are not interested in her goals and cannot do anything for her. She’d have been much better off jumping online for a couple of minutes to learn the locations of all the major marketing and advertising firms in the city and camping outside their doors.

That’s what I did when I was looking for a job years ago, after completing my M.Sc. studies. I didn’t wear a placard, but I did post “Lab Technician Available” signs around the research wings of the universities and teaching hospitals around Toronto and nearby Hamilton.

And the signs didn’t just announce that I was available. They also listed the laboratory techniques in which I was proficient, and therefore, how I could help your lab.

I got a lot of interviews out of that campaign and landed a couple of job offers.

Just over a decade ago, while working for a couple of science magazines in Washington, DC, my group needed to hire a couple of writers. As one of the hiring managers, I met all of the candidates and routinely participated in the same conversation:

“I’ve always loved writing,” the candidate would gleefully tell me.

“Well, that certainly helps with this job,” I would smile. “What have you published?”

The candidate’s smile would waver.

“Well, nothing,” he or she would hesitate. “But I love writing.”

“Great. Do you have any samples?”

An embarrassed shuffle in the chair.

“Um, no,” the candidate would visibly shrink in the seat. “It’s mostly just personal writing.”

By this point, I would have been willing to look at that.

To a person, I would offer the same advice at the end of our conversation:

“I can’t say how this process will go, but if I can make a recommendation: If you want to write science, write science…for anyone…whether paid or for free. If I can’t see your writing, how do I know you can write?”

If you say that you’re dying to do something, then prove that to prospective employers by actually doing it.

I would never apply for a job as a screenwriter without several screenplays in my pocket. And I’m pretty confident that it is not enough to stand on the corner of Hollywood & Vine in Los Angeles offering my services (at least not screenwriting services).

And when you do the thing you’re dying to do, make sure you do it well.

If my screenplays are shit, why should anyone hire me? If the placard you’re using to market yourself is unimpressive, why would a marketing company hire you?

Your effort doesn’t have to be professional-grade necessarily—what individual had that kind of budget?—but if it’s not exceptional in some manner, why would I make an exception and hire you?

I wish the young student well. She has taken the first step, but has so many more to go before she is likely ready.

6 thoughts on “Do what you want to be”