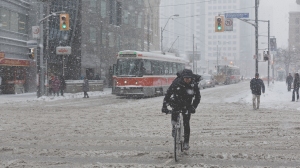 From thousands of feet, the snowflake made its way from its misty nursery to a gentle caress of Henry’s cheek, slowly melting where ice meets the dampened skin to puddle with its fallen brethren.

Henry faces the sky, his back firmly planted in the snow bank, the drift slowly cocooning him as the crystalline waters descend, tears of boreal gods.

Flakes weave with the hairs of his beard, completing the whitening that age has yet left undone, his thinning scalp protected by the few remaining threads of a toque too old to be merely ancient.

Pedestrians trundle by, eyes held askew, muttering their disapproval as they bow their heads against the wind and cold. But he remains oblivious to their stares and sneers, in a world of his own, one with the thickening storm that swaddles him.