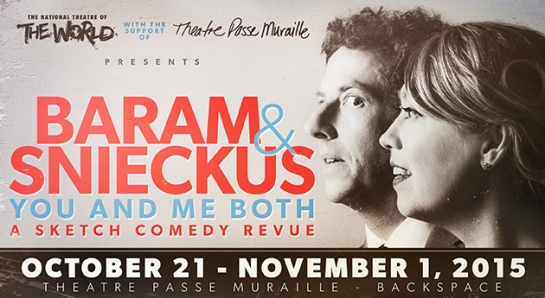 As a disclaimer, I should tell you that I am in love with Toronto comedian Naomi Snieckus. What keeps this from getting too awkward—for me, at least—is the fact that I am also in love with her comedic partner and husband Matt Baram.

There. I said it. It is out in the open. Let the restraining order chips land where they may.

Last night was the preview of Baram and Snieckus’ latest stage revue You and Me Both, playing at Toronto’s Theatre Passe Muraille – Backspace. And short of attending the show in the performers’ living room, a more intimate setting could not be found.

Minimalist is too long a word to convey how intimate the Backspace is. As the sell-out crowd of about 40 patrons stirred on their Obus-form cushions, we were faced with an almost barren stage but for a handful of stools and chairs, the furnishings hearkening back to Baram & Snieckus’ days as performers at Toronto’s Second City. And the stage itself was little more than a black box that Schrödinger’s cat wouldn’t be caught dead in (or not).

The reason I go on about the environment is because this is the setting in which Baram & Snieckus work best. When you see these two perform, it is less a classical theatre experience where the actors remain in a distinct world, separated from the audience. Instead, the audience is embraced by the performers—not literally, more’s the shame—and shy of being brought on stage, are used by the performers to heighten and inform the performance. As an audience member, you feel special in their presence (see earlier disclaimer).

But onto the comedy.

Unlike most Baram & Snieckus performances where improvisational scenes take the day—you will be hard-pressed to find two better improv performers—You and Me Both is a scripted show, a combination of sketch and musical revue, most of which worked really well.

The opening musical number was a bit uneven, Snieckus seeming more comfortable with the music and routine than Baram. Astaire and Rogers these two aren’t, but Snieckus sold it for everything she was worth. Baram musically redeemed himself later in the show, however, in a number that played to his strength as a performer: frustrated under-achiever.

The sketches, however, were classic Baram & Snieckus as the two latched onto characters of all stripes. After a decade of performing together, the two are perfect foils for each other. If screwball comedies ever became vogue again, these two are Rock Hudson and Doris Day (with Snieckus as Hudson).

As scene transitioned to scene, Baram & Snieckus chameleoned into their roles, the muscle memory of improv turning them into the characters rather than simply performing them. That being said, the only bit that really fell flat last night was ironically the lone improv piece.

Watching these two perform is tantamount to witnessing a comedic kaleidoscope, every twist and turn bringing something new to dazzle the eyes and ears. You and Me Both is just the latest twist and more than lives up to expectations.

The intermission-free show, which was listed as 80 minutes but has been cut to 65, runs until November 1 with shows at 7:30 pm and weekend matinees at 2 pm. Knowing these two, each performance will offer something new, so consider seeing the show more than once. For $20, you’re unlikely to spend a more entertaining hour.

National Theatre of the World

2 thoughts on “You and Me Both – a revue review”