Every year, as October transitions into November, I go in search of a new red poppy pin in honour of Remembrance Day on November 11. It is a tradition in my family and across Canada to append the crimson flower to our lapel as a reminder of the bloody sacrifices made a century ago.

I also wear it to honour my great-grandfather Francis Sowden, who came home from the Great War, unlike so many others, including siblings on my great-grandmother’s side who are sadly just names without faces to me so many years later. 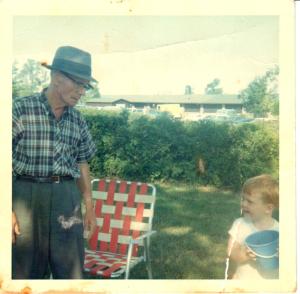 I am one of few in my generation to have known Francis Sowden.

Recently, I have heard people complain that the commemorative symbol of the poppy has been co-opted by those who want to hail it as a symbol of the glory of serving in the military, if not actually the glory of war itself. This bothers me.

I greatly thank all those who have, do and will serve in the military both in Canada and abroad, many risking their lives to keep others safe. Although I was an unthinking idiot in my youth, I have learned that these people, while frail humans, are noble titans who see conflict as a last resort.

For all that nobility, however, the poppy must remain a separate symbol.

A painting from the Royal Ontario Museum that haunts my dreams. (sadly, I cannot remember artist)

The poppy reminds us of the horrific toll of war. It is a crimson stain upon our lapels that taints us all and reminds us of the fragility of the peace that surrounds us. The bloody hue taunts our civilized smugness with a warning of how easily we can fall into the pit of violence, whether as individuals, communities or countries.

While we wear the blood red poppy to honour the fallen of World War I, we also wear it as a badge of shame that the war ever took place, and that the war to end all wars wasn’t.

This dual purpose must never be diminished. We must strive to be better.

And next year, as October transitions into November, I will go in search of a new red poppy pin in honour of Remembrance Day on November 11.

I will never forget.

A cemetery near my home reminds me of the sacrifices