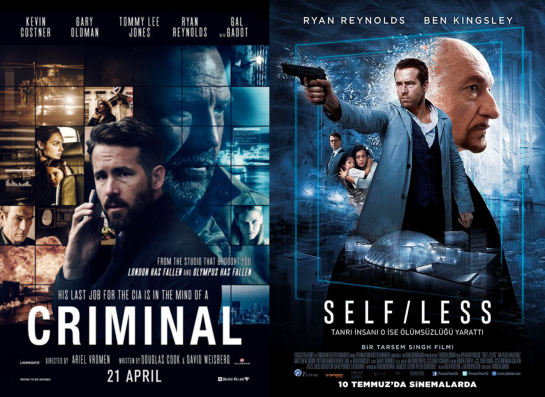 Ryan Reynolds is a hot commodity in Hollywood, these days. Unlike so many starlets, however, they want him more for his brains than his body…quite literally.

Or at least that’s the only way I can explain why twice within a year they have tried to scramble his brains: first with that of Sir Ben Kingsley, and more recently with Kevin Costner’s.

In Criminal—recently released to Netflix (trailer)—Reynolds is CIA agent Bill Pope trying to protect a hacker called the Dutchman (Michael Pitt) who has managed to wormhole his way into the American defense system, enabling him to launch missiles at will. But before he can bring his man in, Pope is captured by the evil rich anarchist Xavier Heimdahl (Jordi Mollà) who tortures Pope to find the Dutchman.

(Did these people not see Young Frankenstein?)

Give a psychopath super-spy skills and knowledge? What could go wrong?

As expected, shit goes to pieces and the hunt is on—by the CIA, Heimdahl and even the Russians—for both Jerico and the Dutchman.

Despite being an action-thriller with plenty of gore—Jerico kills and maims indiscriminately—Criminal ultimately asks philosophical questions about who we are, how we got that way and can we be redeemed.

As the movie progresses, we witness the influence of Pope’s good-guy neurological engrams on the social and moral chaos of monster Jerico. Something is wrong, Jerico explains as he grasps his head; something is seriously interrupting his thoughts and actions.

In a humorous moment, Jerico learns he is experiencing something the rest of the world calls emotions, possibly for the first time in his life. He is unimpressed.

Given the stellar cast, which also includes Gal Gadot as Pope’s grieving and confused wife, the performances are mostly passable, especially given the woodenness of the dialogue—the screenplay was written by Douglas Cook and David Weisberg, who previously penned The Rock and Double Jeopardy. This is an action film, so we shouldn’t really expect much.

To my mind—and friends disagree—the deepest performance is offered by the coldest, most heartless character Jerico, much as the same could be said for Boris Karloff’s Frankenstein and Michael Fassbender’s robot David in Prometheus. In a very dark turn, Costner embues his merciless killer with dark humour and ultimately, as Pope’s neural influences and memories kick in, a confused heart that many of us can understand.

Assuming you can leave your credulity in a drawer, the story is minimal but passable. That an action film makes any attempt to ask lofty questions is laudable.

Unfortunately, as I alluded at the start, Criminal suffers in comparison with another brain transfer film: Self/less, released in 2015 and also starring Ryan Reynolds (trailer).

In that film, Kingsley plays billionaire industrialist Damian Hale at the end of his life but desperate for more time. Meeting with a neuroscientist who essentially offers him immortality, Hale arranges his own “death” and has his neurological patterns transferred to Reynold’s brain, assuming a new identity as Edward Kidner. Reynold’s character volunteered for the experiment to raise money to rescue his daughter from life-threatening disease.

Again, chaos ensues as Reynold’s memories invade Kidner’s consciousness, and the neuroscientist and his mob race to capture their subject, destroying everything in their path to maintain their secret.

Like Criminal, Self/less asks questions about what defines our identity. But it delves even deeper, going into questions about one’s right to an identity and the ultimate costs of consuming another’s. And for all characters, it is a story about sacrifice.

Given this backdrop, Criminal might have been seen as a better movie if only for what it tried to do. But on the heels of Self/less, it simply looks like a pale imitation that made a valiant, if ultimately doomed, attempt at significance.

Ironically, it reflected its own plot.