He ain’t half heavy, he’s my half-brother – The Adopted Hollies

I read an article this weekend that described the murder of a man by his half-brother. Normally, I don’t read these kinds of stories, but I was drawn to this one because of the phrase half-brother, which made me wonder why this phrase was still in common use.

What the hell is a half brother? (Shawn, Scott, me)

I appreciate that historically there may have been a reason to keep track of who one’s siblings were from a legacy perspective. Family homes and farms (and for the wealthy, estates) possibly hung in the balance when Dad died…although I question how often this was a concern. And no self-respecting Shakespearean comedy or drama would be complete without an evil half-brother. But why now?

To quote the Bard:

What’s in a name? that which we call a rose

By any other name would smell as sweet;

Blood (n): the fluid that circulates in the heart, arteries, capillaries, and veins of a vertebrate animal carrying nourishment and oxygen to and bringing away waste products from all parts of the body.

So again, I ask why the fixation on a surname and the concept of blood ties?

I never knew my father—not something I take personally; just a fact—and so I have no particular attachment to my last name aside from convenience and familiarity. I feel no compunction to continue the family name. Other people have the surname of Willis…let them continue it if they want.

And my brothers and I only share one common parent—our mom—and so have different surnames. Does this make them any less my brothers, however, than a pair of siblings who shared the genetic legacy of the same pair of parents (pairents)? Not for me (you’d have to ask them their perspectives on this).

For the famous, an argument can be made that sharing DNA somehow opens doors from one generation to the next: Ken Griffey Jr., Drew Barrymore, Robert Downey Jr., Robert Kennedy Jr., Paris Hilton. 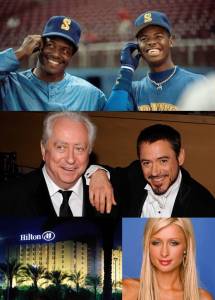 Not sure how that last one works

But in most of those cases, sustained success comes from inherent talent and drive, not simply DNA. (I still don’t understand why Paris Hilton is famous.) Likewise, for every case of possible nepotistic success, there are hundreds or thousands of cases of success despite lineage (no disrespect to parents anywhere).

Perhaps I am the anomaly on this, but I simply don’t understand the importance of the nomenclature to who I am as an individual or how I respond to a family member versus a close non-genetically linked person (aka friend).

Agah, Nicholas and Marsha are my siblings despite the lack of genetic links

Call me Ishmael, for all I care…if we are good friends, you have likely called me worse.

In the meantime, I’ll use my bloodlines to circulate oxygen to tissues and white cells to fight infection.

We few, we happy few, we band of brothers;
For he to-day that sheds his blood with me
Shall be my brother; be he ne’er so vile,
This day shall gentle his condition:

Be as egocentric as you want, but always remember: You were one point mutation away from being somebody else.

(PS To the genetics nerds out there, I know they messed up the “original” strands in this diagram as the originals from different strands cannot be identical but rather should be complementary.)

What cries in your genetic code?

Or are you bred for simpler times?

The adage I hear a lot in writing circles and books is “Write what you know”. By that, people mean write about the things for which you have a passion, because that passion for the subject will shine through your writing and become infectious to your reader or viewer.

To a large extent, I agree with this sentiment, but I think there has to be codicil. When you know how to write, write what you know.

Let me explain with an anecdote.

When I first started writing, I was coming out of a career as a biochemistry researcher who had spent the bulk of my training in protein biochemistry and genetics. That was where my passion lies. So, perhaps as no surprise, when I decided to become a science writer, I focused much of my initial energies on writing about protein biochemistry. I understood the science; I could see the story quickly; I could write about it with some fluency.

Unfortunately, despite or perhaps because of my passion and fluency, I was completely unreadable to anyone who wasn’t already a protein biochemist. I wasn’t speaking to my audience in terms they could understand but rather in terms I could understand. To a greater or lesser extent, I might as well have been writing in Klingon, which I suspect would have given me a broader audience.

When I finally realized what was happening—thanks to all of the people who beat me about the head—I made a pact with myself. Until I felt that I could really tell a story, I would do my best to avoid writing anything about that at which I was most expert. I had to become my audience: the relative non-experts.

About a year into writing about topics I had to research and for which I had to ask potentially stupid questions, my writing had matured to the point where I could go back to my area of expertise and approach it in the same way. I had finally arrived.

I think the same holds true for any kind of writing, whether news, novels, screenplays, blogs.

Until you are capable of telling a story that your audience can decipher, and more importantly wants to read, you are probably better served to stay away from the topics you know best. To do otherwise means running the risk that you will leave out the “obvious” and the “well, yeah” that you know in your bones, but that could be vitally important to an audience member trying to understand why certain facts or behaviours in your story exist.

Give yourself—and by extension, your audience—a chance to learn your story, to experience it at a visceral level. As you develop your story, you’ll likely find yourself asking questions of your plot or characters that your audience would ask. You want your audience to think, but you never want them to have to research. Until your work becomes part of a school curriculum, it shouldn’t require a study guide.

It is easier to remove the truly superfluous common knowledge or understanding later than it is to convince yourself that the information you need to add isn’t common knowledge.

When you are ready to tackle it, the subject(s) for which you have passion will still be there. Consider them the reward for all the hard work you did up front.

In a future post, I hope to discuss a flavour of this topic: “Based on a true story”.