We are all, in many ways, shaped by our life experiences.

It is important to remember, however, that those experiences don’t have to define who you are or what you become. That is up to you.

Can’t believe that it is has been four years since I first set foot in that bizarre otherworldly island paradise.

To stand where the Earth is wrenching itself apart, to walk along cracks in million year old lava flows, to feel just a smidge of the planet’s inner thermal turmoil is to be humbled.

Seeing this photos again reminded me how badly I need to go back to Reykjavik and those wonderful lava fields, the juxtaposition of life and death.

As though the town was pulled from a toy railroad set

Seems like everyone in Iceland is connected to the sea

The city is dotted with beautiful gardens

An artificial geyser set up in town

The island country is slowly torn in two

AS the planet comes apart, its cracks are filled by nearby lakes

Life clings to every surface in Iceland

The sweat of distant glaciers slowly finds the sea

Tour buses flock to the gap between tectonic plates 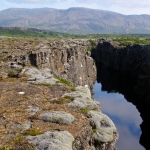 Scuba divers flippered their way through these channels

Geothermal energy is the name of the game here

A chance to walk right through a rainbow

Wasn’t too keen on looking for the pot of gold

The 4-terraced waterfall was so beautiful and powerful

The salts are so thick, the water takes an unearthly hue 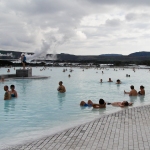 Tourists and locals bask in the Earth’s embrace

In writing, one of the tips for jazzing up your story is to put your character into an odd situation and watch how he or she deals with the new circumstances. In comedy, we call this being a “fish out of water”.

On Golden Dong (near the pond in Reykjavik)

Realizing there was an opportunity here, I sat on a nearby bench and spent an amazing hour or so watching locals and tourists come upon the vulcanized penis. It was a magnificent chance to people-watch and learn about the range of emotions.

Some were disgusted. Some were anxious for their over-inquisitive children. Many were amused. Most arrived quietly and left highly animated.

I’m not sure what this says, but I seemed to be the only one who took a photo of it. 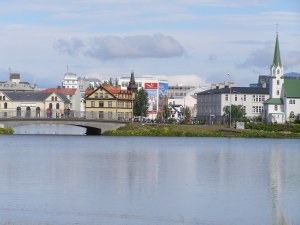 As a North American, I was not used to the beautiful simplicity of a European city (Reykjavik)

Do you ever feel like there is an idea inside you just waiting to burst forth? Like you can’t control the energy that is welling up?

It is there, just below the surface, and no matter how much you try to suppress it–it’s not ready; I’ll embarrass myself; what will others think–you really have no choice but to show it to anyone who passes by.

Congratulations, you’re an artist. Welcome to the club. Oh, and you might want to stand back…someone else is ready to explode.

The geyser takes a step back, garnering its reserves for another run

From within the Earth’s crust, water mixes and warms, flinging itself skyward