A wonderful thing about the stage show Puppet Up! is that like all good improv shows, the lights go up, then good or bad, the sketch happens, and then the lights come down.

There is a window for the jokes to live or die, for the story to succeed or fail, for the characters to evolve or not.

And then the window closes, and we move on to the next sketch.

The Happytime Murders is what happens when that window refuses to close, or at least takes 91 minutes to close.

The plot is classic film noir. [NO SPOILERS]

The world is modern day Los Angeles, but it is now populated by humans and puppets, only the puppets are considered second-class citizen. The story centres on the exploits of Phil Phillips (Bill Barretta), washed up cop and now puppet private eye, and a sudden killing spree that forces Phil to work with his old human partner Connie Edwards (Melissa McCarthy).

And then there’s this dame with a body that literally just won’t quit.

Now, atop that film noir scaffold, you can layer…no, trowel…no, backhoe 1000 sex jokes, puppets saying “fuck” every few seconds, and a rather unnerving cowsturbation moment and you have The Happytime Murders.

There is no doubt that Henson Alternative can do puppetry, and this film is ALL about the puppetry.

[Disclosure/Bragging: I personally know some of the puppeteers who worked on this film. (See Puppet Up! visits Toronto)]

The skill with which this movie was made is astounding, particularly if you watch the behind-the-scene videos on YouTube. These are seriously talented and amazingly funny people.

As expected, the human actors simply cannot keep up with their frenzied felted friends. Even Melissa McCarthy at her Melissa McCarthy-est cannot compete on screen with these little monsters…seriously, she might as well have been Jenny McCarthy. (Note: Not intended as a slight on MM.)

The lone human performer who stood out and more than held her own was the delightful Maya Rudolph. I have always had my suspicions about that lady…that she is not fully human…this performance may have proven me right.

So, if the puppetry was so brilliant, why didn’t this work for me?

Aside from lights cutting scenes off, the one thing that Puppet Up! has that the movie doesn’t is an emcee (ringmaster? Nurse Ratchet?) of the stage show.

As funny as the emcee is as a performer, he grounds the show. He keeps the performance from getting crazy…well, crazier…well, stupid. And he serves as a connection to the audience, joining us in our confusion or surprise.

Speaking of which, where was the cleverness and the wit, the cutting satire and insightful playfulness that we routinely see in Henson outings and even in the raunchiest of Puppet Up! sketches?

From a comedy perspective, they took the best of The Muppet Show and rewrote it with the worst of Beavis & Butthead and Dude, Where’s My Car?

I’m not trying to point a finger of blame as I’m not sure blame is necessary or relevant. It was an experiment, and not all experiments are successful.

To that end, I hope there are more outings with these characters—again, particularly when you see what is possible from these talented people—I just hope in future efforts, they simply let the characters be real and don’t feel that they need to center all of the humour on their puppetness.

Otherwise, it is a felted minstrel show, and there would be the greatest irony in the world given the central conceit of The Happytime Murders.

As some of you may know, I am one of the comedy writers for a sketch show called SomeTV!, which is currently in production in Toronto. As our godhead Nic likes to describe it, the show takes the no-sacred-cows approach of Monty Python’s Flying Circus and combines it with the playful anarchy of The Muppet Show (no hubris here, eh?).

Now, for some, that may sound like the greatest writing gig ever. Those some have clearly never written for puppets.

Human actors—or as we call them, Fleshies—can be tricky enough to deal with. Prone to completely misunderstanding the point of a scene or sketch, they tend to have difficulty learning lines that make no sense to them.

Luckily, their natural insecurity, despite the outward facing ego, means that they can be molded into subservience, if only in two- to five-minute chunks, the longest most are willing to go without checking their make-up or cell phones for calls from their managers.

At their core, Fleshies are the rhesus monkeys of the performance world, clinging to each other for some semblance of affection but ultimately willing to give that up for warmth and sustenance.

Not so puppet actors, aka the Felts or Felties.

These are the apex predators of the performance world and should always be treated as such. Sure, they look cute and cuddly, with their giant heads, bulging eyes and disarming colours, but that’s exactly what they want you to think.

You don’t write for Felties so much as start a sentence that is perpetually interrupted with ideas or lines the bastards think are smarter, funnier, crazier.

Fleshies forget their lines because they’re not too bright…Felties “forget” because they are malicious egotists.

Adding to the challenge is the near-impossibility of figuring out a Feltie. He, she or it is the poster-child for multiple personality disorder.

You think you’re writing a scene for a young Spanish girl, when out of nowhere a tall Jovian Codswadder shows up to take the scene in an entirely new direction. (To this day, the only thing I know about Codswadders is they come from Jupiter, where given the crushing gravity, their height makes no sense.) 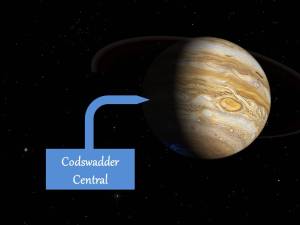 NOT the home of young Spanish girls

It’s like dealing with someone with hyperactive comedic Tourettes, and trust me, I’ve taken enough improv classes in Toronto to know what that looks like.

Felties are also astoundingly lazy creatures. Sure, they look frenetic on the television screens, but in reality, these buggers will literally not lift a finger without someone doing it for them. Our show has an entire team of Feltie fluffers whose entire job is to see to the every-last needs of these freaks. We’re talking major OCD: obsessive-compulsive demands.

Trust me, the dictionary writers of the world have the concept of “puppet master” completely backwards.

To be fair, the Felties do sometimes come up with lines that are funnier than the stuff I wrote. But on the flip side, they get away with lines that no intelligent Fleshie could ever hope to pull off.

This has two impacts: 1) the Feltie doesn’t have to try very hard to get a laugh, and 2) they can be as crude, rude and insulting as they want, knowing everyone just thinks “awwww, how cute”.

There’s a reason you don’t hear a lot of puppet radio programs…the shit they come up with is repugnant. 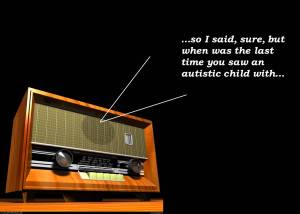 So, why do I stay? Why do I continue to write for these self-glorified hand-warmers?

Most days, I don’t know.

But then the rent comes due and I realize that my best chances at succeeding as a “comedy writer” is to have my words (or some semblance thereof) come out of a Feltie’s mouth…and those lint-sucking leeches know it, too.

SomeTV! is being produced by Lemon Productions Inc. 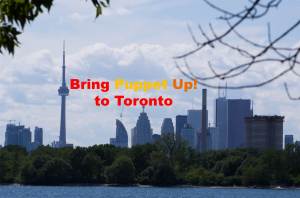 As many of you well know, I am interested in puppetry and am currently working as a writer on a sketch comedy television show in development called SomeTV! that involves both human (fleshies) and puppet actors (felties). More on this later.

In the meantime, I am also striving to get an irreverent show called Puppet Up! to come to Canada (more specifically Toronto) and perform. A product of Henson Alternative, these people have taken the inside humour of the Muppet Show and ratcheted it up a thousand-fold.

I’ll let them describe the show:

What happens when Henson puppeteers are unleashed? You get a new breed of intelligent nonsense that is “Puppet Up: Uncensored” – a live, outrageous, comedy, variety show for adults only. Enjoy an unpredictable evening when six talented, hilarious, expert puppeteers will improvise songs and sketches based on your suggestions! With a motley group of characters brought to life by the world renowned puppeteers of The Jim Henson Company, this is not your average night at the improv and it is definitely not for children. But all others are welcome to enjoy the uninhibited anarchy of live puppet performance as never seen before!

Strangely, it seems the show is bashful and so I am asking for everyone’s help to encourage them to come to Toronto with a social media campaign entitled: Bring Puppet Up to Toronto. (How’s that for imaginative!?)

I’ve set up a Facebook page that I ask you to “Like” and “Share” with your friends, colleagues, and that guy you met once who glommed onto your page when you weren’t looking.

As well, please visit the Puppet Up! Facebook page and let them know they should visit Toronto…even if you don’t live here.

And if you follow me on Twitter, please retweet and favourite the relevant posts…most of the other posts are completely irrelevant. 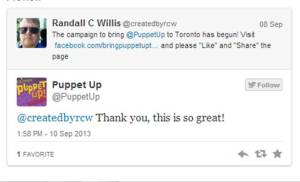 As Animal is my witness, I will wear them down and they will either have to come to Toronto or file an injunction!

And even if you don’t do any of these things (I feel tears coming on), then at least enjoy these YouTube videos…they are very funny and you should get something for having read this far.

Puppet Up! Hit the Streets of Edinburgh

Where do babies come from – Puppet Up!