The wonderful Grant and his weasel buddy join me for a post-show photo (also shown Peggy Etra and Brian Clark).

Grant Baciocco is an amazingly talented actor and puppeteer I had the good fortune to meet online and then in person when he came to Toronto with the improv puppetry show PuppetUp! (about which I have raved extensively elsewhere).

At the beginning of each week, he posts Creative Mondays and today was no exception. Today he talked about “A job you hate”, which I excerpt below:

For years after college, about ten in fact, I worked as a substitute teacher.  It was an okay job, certainly flexible enough and I was making money, but by the end of those ten years I was starting to burn out because it was not the job I wanted to be doing.  I was good at it and several times I was told I should get my teaching credential because I was such a good teacher.  But deep inside of me I could feel a darkness building up because I was doing a job I absolutely hated.

The moment I made the decision to stop subbing and focus on The Radio Adventures of Dr. Floyd, it felt like a weight was instantly lifted from my chest.  I attempted, for the millionth time, to lose weight and it was actually working (lost 80 pounds).  I was just a million times happier than I was when I was subbing.  And guess what?  I became more creative!  This was the creative boom era for Dr. Floyd, because I was doing something I love.

Grant’s is a lesson too many of us learn very late in life (NOTE: I did not say “too late in life”…it is NEVER too late).

In my case, I was fortunate enough to have a series of occupations I loved for a period…scientist, science writer, media relations, advertising copywriter…but with each, I stayed in the occupation long after I had fallen out of love with the choice. I had to be a certain amount of miserable before I was brave enough to jump.

But two years ago, I completely jumped ship to pursue my true love: story telling (screenplays, novel, sketches, short stories). I’m still not making money off any of this, so I live on freelance magazine writing and ad copywriting. But to Tiffany’s point, it is what I do to eat and sleep under a roof.

If you are fortunate to know your passion—it can take time to figure out what it is—then you must make it happen to find happiness (hunh, “happen” and “happiness”…so similar).

And if you haven’t fully defined your passion yet, go with your gut until you do. Explore the universe of opportunities, until you do. You may not end up the financially richest person on the planet, but you’ll definitely be one of the spiritually richest.

If you don’t want to take it from me, then take it from Grant. Find your happiness and pursue it with everything you have. Despite appearances, you really do have nothing to lose and everything to gain.

As the alcohol sets in and the year ends, I thought I’d take a moment to consider the 2013 Randys, the seminal moments and/or people of the past year.

Every year is special but this was truly a year for the books (or Kindles/Kobos if you’re one of those people).

Friend, child of the universe and novel buddy (as in we’re writing a novel) Agah

Most head-spinning period: Austin Film Festival, both the sessions and attendees 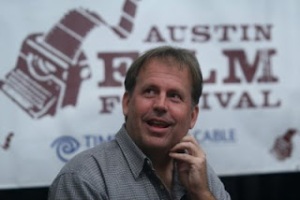 This is Leela…you met Nick and Marsha above

Greatest moment of the year: Photo with cast of PuppetUp!