This past weekend, Toronto played host to the NBA All-Star Game and among the dozens of events, Canadian recording artist Nelly Furtado was asked to sing O’ Canada. In keeping with her musical stylings (I believe), Ms Furtado decided to sing an interpretation of the song that was slower in tempo and a bit more soul-searching than its typical performance, which annoyed a few people.

Now, I am a sing-it-straight person. I believe national anthems should be performed as intended (let’s not get into changing the lyrics). Thus, when someone opens up with a bit of musical show-boating, I get annoyed. (Call back to Roseanne Barr singing The Star Spangled Banner.)

But you know, that’s my problem.

The controversy, however, opened up another question for me:

Why do we play the national anthem(s) at sporting events?

I could understand an argument for truly international events like the Olympics (played when the winner is chosen) or World Cup (do they play anthems here?), where nationalistic fervor is part of the equation.

But what, for example, about a hockey game between the Toronto Maple Leafs and Chicago Blackhawks is particularly nationalistic?

This question is especially germane when you consider the many of the players that perform for these teams are from countries other than the United States and Canada (including Russia, Sweden, Czech Republic, Slovakia, Finland, etc.), and play in mixed squads.

So why do we play them before regional/local sporting events?

I love my country. I like my national anthem. I really don’t care if we play it at sporting events.

It’s time again to express my gratitude for everything that my home & native land has given me, and to wish you all–Canadian or not, here or abroad–a safe and wonderful year.

My only wish is that you all have the good fortune I have experienced and know the love that I know.

Peace be with you all. 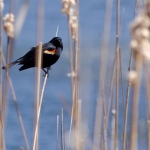 Time with friends and family

Being awed by nature

A community in peace

Embracing the large and small

At one with nature

Fearing not the darkness

Thinking of those we lost

Knowing solitude is not isolation

Sister Twisted, who invited me to walk with her group. (Credit: Toronto Star)

Well that was different. Just spent several hours in a misty rain wandering the streets of downtown Toronto, waving at colourful people on the sidewalk while screaming my head off.

Welcome to Pride 2015 in Toronto, folks.

What’s a religious theme without my beloved Toronto Marlies?

While I have always been a strong supporter of human rights in all forms, I have generally avoided Pride Week in Toronto simply because I don’t like crowds. But this year was different.

This year, I was invited to participate in the parade itself by my friends The Toronto Sisters of JOY (Jubilant Order of York), a group of amazingly loving, life-affirming people who seem to work from the premise that to be heard, you must be seen (my words, not theirs).

The Sisters pose with their banner

So, early this morning, I pulled together a costume of sorts (not my forte) and headed downtown to meet with the Sisters and some of their other disciples, and into the parade we went (news video).

Well, into the court yard to meet, then into the parade to wander like the 12 tribes to search for our place in the parade, to wait in the drizzle to walk a few blocks and wait some more and then past the float until… well, you get the idea.

But once the parade started, it was so much fun. Never have I ever felt surrounded by so much love. Every colour and every letter in the alphabet came out to show their support of just LOVE and FRIENDSHIP. It was amazing.

I am Canadian, too.

Everyone shouted their support. 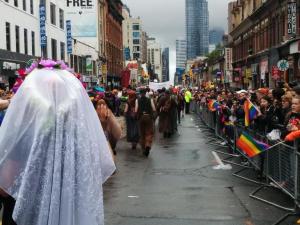 And when the parade finally ended, I was ready to keep walking…instead, I went to Fran’s Diner for a late lunch.

I am proud to call myself a friend of The Toronto Sisters and of several communities of people whose only requirement for entry is acceptance. That’s pretty cool.

You’ll see the Sisters a couple of times in this video of Saturday’s TransMarch (language).

I also recommend learning more about the You Can Play Project, which promotes inclusiveness in sport. 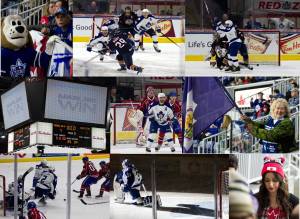 (It took 4 days, but I was finally able to pull my depressed head out of my @$$ and write a final address to the players of the Toronto Marlies hockey club, who lost the AHL Western Conference Final earlier this week.)

Well, gentlemen, it has been a hell of a ride this season—one full of soaring highs and crushing lows—but throughout it, please know that your fans have been immensely proud of you and all that you have achieved.

We cheered when you soared. We hurt when you hurt. Our hearts broke at exactly the same moments yours did. And we did all this because you are a second family to each of us.

My friends are probably sick of hearing about you guys. My Facebook and Twitter connections will get a brief respite from the near-daily onslaught of things Marlies-related. But all of them know, I will be back to crow about my boys and the wonderful organization soon enough.

While I continue with the preoccupations of summer and hope you do the same, know that I am counting the days until I hear the first reports of training camp, the sewing of names onto jerseys, the irritated rumble of the Zamboni prepping that first sheet, the spine-chilling slice of metal blades into perfect ice.

For as much as I will enjoy the sun, sand and water of The Beaches, I cannot wait for the sweet embrace of the Ricoh’s front doors and the buzz of another Marlies season opener. When I peer once again into the South end of the ice and watch my boys start the dream yet again.

All the best, gentlemen. Be well. Rest up. And for God’s sake, stay hungry. 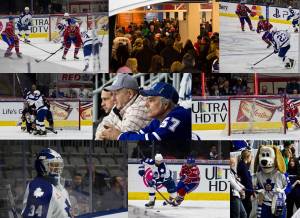 I try not to inject much of my hockey mania into my blog, but I am amazingly excited to announce tonight that the Toronto Marlies, farm team of the NHL’s Toronto Maple Leafs, have advanced to the Conference Finals of the AHL Calder Cup Playoffs.

In the first round of the playoffs, they defeated the Milwaukee Admirals 3-0 in a best-of-five series.

In the latest round, they defeated the Chicago Wolves 4-0 in a best-of-seven series.

The Toronto Marlies are 7-0 in the 2014 AHL Calder Cup playoffs so far.

In performing the double-sweep, the Toronto Marlies remain the only undefeated team currently in the hunt for the Calder Cup.

Be grateful my blog is the last place I am visiting with this information…I have just spent the last two hours littering my Facebook page and Twitter account with this stuff.

The Toronto Marlies remain the only undefeated team in the hunt for the Calder Cup.