A short piece written at a local Flash Fiction show.

That old beater my dad kept in the barn hadn’t run in all the years that I could remember, but it made a hell of a playground for the kids in the neighbourhood.

One day, it was the Batmobile, screaming out of the Batcave as the Caped Crusader and his gender-neutral sidekick were off to feel all funny down there at the sight of a leather-clad Catwoman.

Other times, it was Sir Francis Drake’s Golden Hind, plying the English Channel looking for Spanish galleons or sliding on the breeze through the Caribbean, searching for buccaneer plunder.

But most of the time, it was just my dad’s old beater, sitting there year after year, slowly filling up with mouse droppings or owl scat.

I remember one summer—I was about six—when my dad and grandfather tried to get the old car running. I learned a whole new language that summer, although it was about four years later before I found out that motherfuckingsonofabitchdickwadcrankbitch wasn’t one word.

That was the summer that we found out that cats like to crawl under the hood of a car and nap on the motor. You wouldn’t think it would be hard to get cat fur out of a fan belt, but you’d be wrong. Mom never really liked Mr. Wiggles anyway.

That was also the summer that dad went away. Whenever I would ask my mom about it, she would just cry, and my grandmother would try to distract me with cookies. So now, not only do I not know what happened to my father, but I am also a 300-pound diabetic.

Maybe that’s why I kept the car, as a reminder of the man I never got to know. Mom just shakes her head and my wife wonders why I don’t get rid of that old lemon. I dunno. Maybe they’re right.

All I know is that sometimes I’ll go out late at night to sit in the car and if I’m really still, I can still hear the sounds of the wind rippling in the sails and the sailors pulling on the rigging. You know, I never noticed how much my dad looks like Sir Francis Drake. 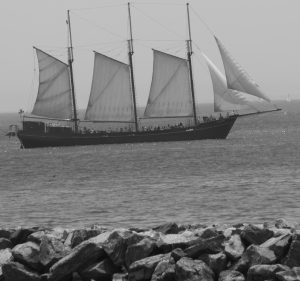 Drake protects the shores of Toronto from marauding pirates