I love to swim. It is one of my favourite activities and one of the only forms of exercise I don’t begrudge, perhaps because I can’t tell if I’m perspiring. I am by no means athletic or proficient with it, but I enjoy doing it and have decent stamina.

Several years ago, a friend of mine decided she wanted to learn to swim. As an adult, however, she was embarrassed that she didn’t already know how, so she asked if I could help her learn the basics. Being a good friend—and not just a little bit infatuated with her—I said sure, happy to help.

A few days later, we got to the pool and I tried to break things down for her. Unfortunately, unlike many other exercises, with swimming you are in water and therefore much of the mechanics are difficult to view directly. Thus, I had to show her the mechanics above water, as though swimming to the ceiling. And that’s when everything started to fall apart.

No sooner did I begin teasing out the various movements in swimming than I realized that I was rapidly losing the ability to swim. Eventually, I just had to thrash about for a bit to remind myself how to do it.

I had been swimming (swum? swam?) for so many years that it was just something I did. It was never something I analyzed. You get in the water. You swim. It was muscle memory.

In teaching my friend to swim, I had separated the technique from the art, and for a brief few minutes, lost the art in the process.

The same can happen with writing.

In the earliest phases of our development as writers, it is important to develop a basic understanding of the mechanics of writing and story, to have someone walk us through the process. But at some point, we have to step forward and simply practice our art.

If writing is purely a mechanical exercise, then it is very dry and boring. It lacks the spirit that it needs to live. It is the difference between an animatronic deer and a biological deer. They may look very similar, but one is alive and the other is inert.

As a more seasoned writer, I have found that there will be times where I try to focus on the more mechanical, structural aspects of the stories I am writing. I want to make sure all the right elements are in the right place. But when I read the material over later, it always sounds forced, wooden, bereft of life.

In my effort to teach someone how to write properly—in this case, teach me—I have, however briefly, lost the ability to write. I have sacrificed the art for the technique.

Technique and process are vital, but they are not art. Art comes as you build the spiritual, intellectual, psychological muscle memory to allow yourself to immerse yourself unthinking into your writing and simply allow the story to flow.

As I’ve said before, story before structure. Art over technique. 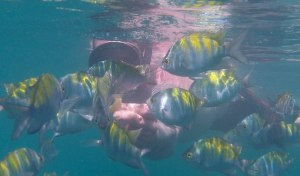 Do fish ever think about swimming? And if so, do they then sink to the bottom? (Manuel Antonio, Costa Rica)