I was sure that I only had the one framed print left…convinced that I had lost the negative and other prints. The most amazing photo I have taken so far in my life.

I’ve taken better photos since that day 20 years ago, but never have a taken a photo where I was willing to sacrifice all other photos for this ONE to turn out. (For the young ones out there, back in the day of film, you had to wait quite some time to know if a photo turned out.)

But while pouring through a box of old photos this past weekend, I found both another copy of the photo as well as the negative! OMG! Woohoo! 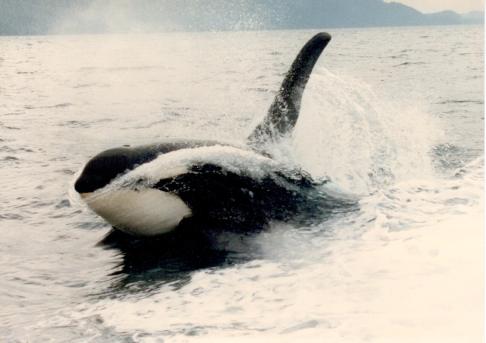 Taken on an orca-watching trip through the Inside Passage between Vancouver Island and the British Columbia mainland, near Port Hardy.

I was ready to let the photo gods kill the other 14 rolls of film I took on that trip for this one moment to work…and it did.

If you told me that as of tomorrow, I would never be allowed to take another photo in my life, I would be saddened but satisfied that I had at least taken this one.