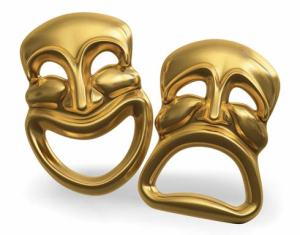 As an advertising copywriter, I was constantly called upon to summarize a client’s product with a single line, as few words as possible that would capture the brand essence of the product or service. The almighty tagline.

As a magazine writer, I am also called upon to summarize the stories I write into a sentence or fragment. Something that will give the reader the kernel of the story so they can decide whether they want to read it or move on.

And finally, as a budding screenwriter, I am asked to summarize my entire story in a single sentence so prospective producers can get my idea and see the possibilities, artistic but mostly commercial.

And yet, with all of this practice in concise summarization, there is yet one product that eludes my abilities: me as a writer.

At last year’s Austin Film Festival, during a session on how to work the festival, the Langlais brothers—that’s how they describe themselves, but Gene and Paul, for the record—challenged each of us to define ourselves in a single sentence as “the writer who…”. They suggested that if we could define ourselves as producing one type of screenplay, it would make it easier for producers and directors to wrap their heads around who we were and where to go when they needed that kind of screenplay. Call yourself something and then be the best that you can be.

The challenge for me was that I couldn’t even decide on a medium or genre, let alone determine what types of stories I wrote.

About the only medium I have not yet written for is radio and that’s more the result of lack of opportunity than lack of interest.

I am naturally inclined to write comedy, but my last two screenplays have been family drama and murder thriller with the possibility of a horror on the horizon.

For nine months or so, the question has plagued me. I am “the writer who…”

Recently, however, because of a screenwriting course and completely separate conversations about life with a friend, I have had a bit of a breakthrough, if not an actual answer.

Maybe, I’m looking at this challenge on the wrong level. Rather than focusing on the details of what I have done—genres, media, angles, etc—I need instead to take everything I have done to its most basic level. Stripped of the decorative details, what is the essence of what I create?

What is at the core of my favourite comedy sketches? My screenplays? My television shows? My magazine articles? And what am I doing that makes it mine?

I still can’t tell people I’m “the writer who…”, but I think I’m a little bit closer.

(Image is property of owner and is used without permission, about which I am of two minds.)

Interestingly, the Canadian film organization Raindance Toronto just posted an article called Creating a Personal Genre. Although aimed at filmmakers, the article clearly has overtones of what I presented above. Check it out.

One thought on “The writer who… (UPDATED)”