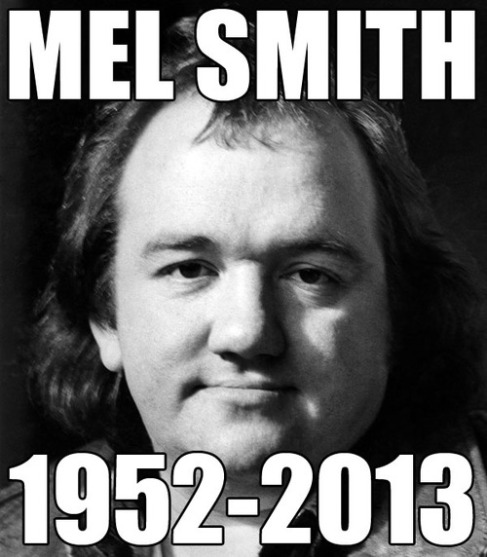 Today, I would like to commemorate the legendary comic genius that was Mel Smith, who passed away this past week.

And he was a legend…in the sense that his story offers a scintilla of fact ham-fisted into a pasty-white pasty shell of human dung perpetuated by self-immolating vivisectionists with personal hygiene problems and a fetish for peat moss.

For those of you who didn’t know him, Mel Smith was a kind, gentle, giving man who would go out of his way to help the less fortunate.

For those of us who did, however, know him, Mel Smith was a fucking asshole. Wouldn’t give a toss about anyone even if they offered to wank the bugger themselves. As nasty a piece of shit as Britain has ever produced, and remember, these include the Thatcher years.

Mel Smith was born in West London on December 3, 1952, presumably from the uterus of a woman who had shagged a large black ram during some pagan ritual the previous March. No one is quite sure why he chose this day, but some have tried to link his birth to the great smog that swept over London the very next day, killing upward of 12,000 people. 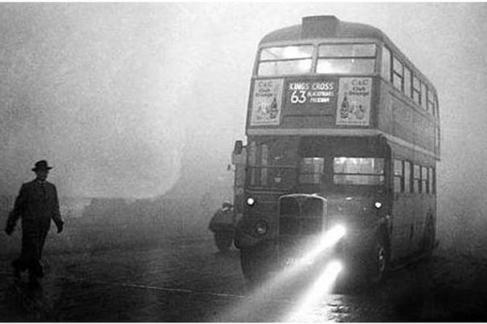 A right bloody bastard he was.

Over the next several years, Mel Smith attended a variety of schools where he was considered a bright pupil. Unfortunately, the ability to shoot light from your eyes is not one of the criteria to succeed in A-levels and Smith’s general lack of intellectual acuity—it is rumoured he had the IQ of retarded tapioca—meant he was only able to attend Oxford.*

It was while attending Oxford that Mel Smith learned he had a knack for convincing himself he was funny, and through sheer perseverance—and a gun—he caught the eye of director John Lloyd. Lloyd, who was fond of both of his eyes, immediately gave Smith a role on the hit comedy television series Not the Nine O’clock News. 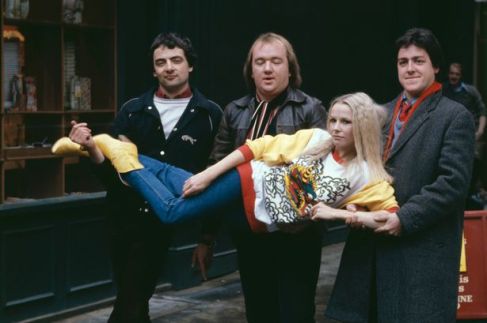 BBC audiences, however, quickly concluded that this was also Not the Funny Comedy Program.

Blaming everyone but himself for the demise of the careers of people like Rowan “Who” Atkinson, Smith beat up the little Welsh kid on the show—Griff Rhys Jones (talk about your Dumbledork)—and started a hard new series that took a satirical look at Islam called Allah’s Smith and Jones.

Two days into the fire bombings, a slight change was made to the title of the show, now Alas Smith & Jones. The ampersand saved the day.

Out of the gate, critics were harsh. “Who are these two wankers who do nothing but mumble to each other from 3 inches?” “Kiss, already.”

But the British public ate it up.

Since the fall of the Empire, they had pretty much been doing the same ruddy thing every night, smugly satisfied in their fetid shanties that they didn’t have to get bloody malaria just to find a decent curry.

Smith, however, dragged his bloated carcass to Hollywood, where he was met with rave reviews like “What is that prick doing to my dog?”, “Can human beings really sweat that much?”, and “Did Charles Laughton just take a shit on my lawn?”

On January 7, 2001, Mel Smith’s career was declared dead. His body, however, continued to function until July 19, 2013, when Mel himself passed away from a heart attack. The news sent shock waves through the British comedy community, both of whom expressed surprise that Smith even had a heart.

Smith leaves behind pretty much everybody who didn’t die on or before July 19, 2013.

*Ed.’s note: It has since been verified that even retarded tapioca can gain attendance at Cambridge. We thank Hugh Laurie for the correction and apologize for printing the aforementioned rumour.

[Images are property of owners and are used here without permission because that’s what Mel would have wanted…and frankly, I don’t give a toss.]

Some of the fine-feathered freeloaders I saw on my trip to Victoria.

Nestled within the canopy of a conifer, this fellow was looking for lunch

Was really happy with the detail on this image

Three sparrows looking for snacks among the rocks

This fellow waited patiently for pub diners to drop crumbs

Something caught his attention