A new day starts, and you rise from your bed. As you head to the shower, your mind drifts to the challenges your boss is having connecting with her 20-year-old son.

As your boss has focused on her career, both her son and husband have come to feel like second-class citizens, the younger adult acting out by joining a gang.

It’s not your place, but as you’ve known your boss for 15 years, you feel drawn into the family drama and spend your morning devising ways to intervene on her behalf while simultaneously coping with the poison-pill clause in the hostile takeover bid.

Sure, if your boss is a friend and she’s struggling, you’d likely help. You have your own life, your family and your job, however, to worry about.

You don’t merely exist to serve your boss’s life.

(Character likenesses are the property of DreamWorks Animation & are used here for teaching purposes only.)

Consider the movie Shrek, for a moment.

Among the characters, we have Shrek, Fiona, Farquad, Donkey, Dragon and Gingie.

Of those, who was the hero of that movie?

Given the movie’s title, it is pretty likely that the central protagonist of the story is Shrek. And given the way the narrative plays out, based on the scenes we watch, Shrek is indeed the hero of the movie.

But do the other characters see it that way?

Did Donkey wake up one morning with a mission to help an irascible ogre find acceptance not only within a community openly hostile to him, but also within himself through his sacrifice for another?

No, he had his own issues.

Did Fiona allow herself to be locked in a tower, guarded by a knight-immolating dragon, so that Shrek could see her example of isolation as a metaphor for his own, and in rescuing Fiona, he rescued himself?

Not so much. Girlfriend had her own agenda.

So, I ask again: Who was the hero of Shrek?

(At least from his or her own perspective.) 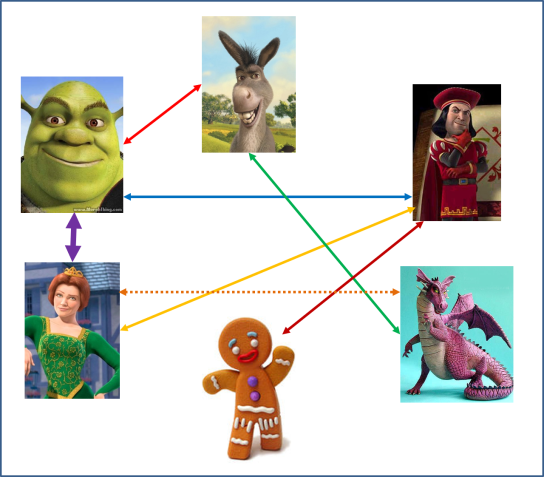 And in seeking to fulfill their own wants and needs, they each experienced their own character arcs. They each suffered their own Hero’s Journey.

As a screenwriter—or more broadly, a storyteller—this understanding is vital to doing proper service to your characters. The secondary and maybe even tertiary characters cannot simply be treated as plot devices, or at least not if you hope to make them seem real.

As you introduce your characters to your story, give thought to what their journeys would look like. Consider what they hope to accomplish by spending time with your main protagonist or the other characters. See their various relationships through their eyes.

And then write them with that in mind.

When they react to a situation or another’s action, they must do so with their own interests at heart, at least as much if not more than their counterpart’s interests.

When one character acts, consider the consequences and stakes for each character, and then watch the dramatic tension rise.

Hear the words a character speaks and consider if those words mean one thing to the larger story and a different thing to that character’s journey. This is the subtext—conscious or subconscious—that you seek.

You may not—likely won’t—accomplish this level of intricacy on your first draft. First drafts are about getting the central story line onto paper (or whatever medium you prefer).

It gives you several starting points, however, as you enter rewrites and search for ways to tighten and heighten your story.

And at the end of that process, you should be able to write a logline for each of the major characters’ perspectives.