“That which we call a rose, would by any other name, smell…”

As many of you know (or have quickly surmised), I am Canadian, and more specifically, Anglo Canadian. Unto itself, that’s a pretty cushy thing to be in this country.

In choosing to live as a writer, however, I added an otherwise unnecessary twist to my life—I forced myself to learn English as a second language.

Wait. Didn’t you just self-identify as an English-speaking Canadian?

Yes, I did. But I’m a Canadian English-speaking Canadian.

And one of the first things you realize when you become a Canadian writer is that you will probably starve for lack of work.

Now, I’m not knocking Canadian writing, whether fiction, for film and television, journalism, what have you. It is easily some of the most beautiful writing available in the English world. But it is often written to (if not for) an incredibly small market, and opportunities to succeed are therefore often few and far between.

Okay, now name one not directed by David Cronenberg or Denys Arcand.

I was once offered a job as the Editor of a Canadian biotech magazine—yes, I used to be even more nerdy—for $30kpa. And yet, already on my resume was a job working for an American biotech mag that started around $65kpa.

Bottom line is thank goodness for my passion to write, because my passion for money has taken a beating.

(Side note: This was a choice I made and for which I take full responsibility. I don’t mean this to be a “life is so unfair” rant.)

What this has meant, therefore, is that to make it as a writer, I have had to learn English as a second language. In this case, American English.

Recently, the BBC published a short article that tried to explain Canadian English within the context of its British and American counterparts. Rightly, the author noted that the differences were more than a matter of spelling (e.g., centre v center; honor v honour). Rather, the differences also manifested in idioms, speech patterns and word choice. 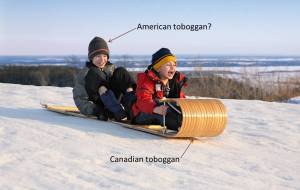 As long as everyone’s having fun

As with most Canadians, I had a bit of a leg up on learning American as our proximity to the border (mere kilometres and even fewer miles) means we are inundated daily by American film and television programming. But I also had the additional benefit of having been married to an American, and a Southerner to boot (more on “boots” later).

Where I would recommend taking the 401 across north Toronto, Leela would suggest taking 66 from Fairfax into Washington. Luckily, we were both practical enough to set aside arguments about whether we needed to go to hospital or the hospital.

All this to say that although the differences between Canadian English and American English can be subtle, they can easily explode before the eyes of the unsuspecting.

Writing for an American biotech magazine and working with American editors was something of an ESL boot camp. And over the intervening 15 years, I like to think I honed my American skills to the point where you suspect I am from Minnesota or Western New York (hello, North Tonawanda).

In fact, I’m going to rely heavily on my multi-Angloism as most of my writing, whether for money or in my screen- and novel writing, is aimed at American audiences. And although my primary goal remains writing the best story, my secondary goal is writing it in the most innocuous way. I don’t want my writing to “read” Canadian. 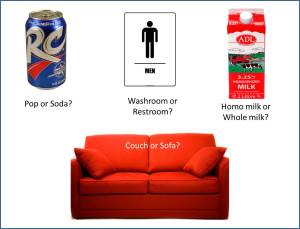 Truth be told, I don’t want my writing per se to be noticeable at all. If it is, I’ve taken the reader out of the story.

This is not to say that I want my stories to be bland, but rather that I want all of the art to be in the story itself, rather than the more mechanical aspects.

In my Canadian stories (so far a sitcom pilot and screenplay), which are set in Canada, involve Canadians and target Canadian audiences, I write Canadian. For pretty much everything else, I write American.

In the meantime, I’ll continue to bounce back and forth between the multiple Englishes like a character out of Monty Python.

Anyone can make fun of how Canadians communicate (or don’t). Goodness knows Canadians do. But I have to admit that I struggle with the whole “oot and aboot” phrasing that American audiences in particular seem to see as a Canadian phrase.

It’s not that I think we pronounce these words correctly so much as we don’t say “oot”. Rather, we say “oat”.

As I mentioned, I was married to a Southerner, and one day, we had a lengthy conversation about the word “South”. Try as she might, Leela could not get me to pronounce the “ou” without it taking on a surreal emphasis akin to “owwwwwww”.

Instead, I would say “Soath”. And instead of “about”, I would say “aboat”. And as I made a point of listening closely to Anglo-Canadians speak, I never heard a single one say “aboot”. It was always “aboat”.

That being stated, I will totally cop to “eh”. It’s us. End of story.

No monsters today, just people taking in the sights and enjoying the beautiful weather on a Sunday afternoon.

Even the photographer got into the act

Catching some rays while thanking the crowd

A little over-dressed for street Jenga

I swear there were 3 other players…but no photos

Leela and Piper take in the jewelry wares of a vendor

Didn’t quite get all the letters, but the chains behind the band spell “Kensington”

The crowd stays well back of a Muay Thai exhibition

Half the exercise is making the face

An artist paints his version of a famous National Geographic cover

While wandering the streets of Toronto yesterday with a couple friends, we stumbled through the Kensington Market region in the downtown core, which becomes an urban pedestrian market every Sunday.

At one end, a series of creatures emerged from the overgrown garden of a house, catching my eye and my imagination.

I haven’t been through the artist Moses Kofi’s web site, but offer it (and some of his creations) here for your amusement and intrigue.

Don’t get too close

Be careful even in the urban forests

The devil waits to snare you with its tongue

Check his web site out to see his other incredible creations

Faster than he looks, he’s hard to escape

PS I am in no way connected with the artist…I just really like his stuff!

Over the last few years, I have met a lot of artists of various stripes, and almost to a person, one of the major fears each has is the belief that to become a success and to make a living with their Art, they will have to dilute that art. They’ll have to sell out. Some simply fear it in quaking silence, while others fend it off with flecks of foam like some rabid dog chained in a backyard of their own making. To each, their own.

You have a vision for your Art and you must respect that. It is because you are doing your Art that your Art is different from anyone else’s. By the same token, if you do hope to make enough money to keep at it, you must be able to express your Art in some commercial way.

Admittedly, with technologies such as self-publishing (formerly known as vanity publishing) and phones that offer better cinematography than anything Cecile B could have dreamt of, you can go it alone as no one before you could. You can make all of your dreams come true, but the question is, will those dreams come true? Will anyone beyond your mom, your partner and a few close friends bother with your Art once discovered?

I’m not saying to make a living you have to sell out. Don’t despoil your craft in the name of crass commercialism. If you’re truly an artist rather than a hack, it wouldn’t serve your purposes and you’d come to loathe the thing you once loved.

No, I’m talking about finding a line of compromise between your vision and the market’s.

As this is particularly close to my heart right now, let’s say that you’re writing a screenplay. First, congratulations. There may be thousands of screenplays out there, but I am confident there are billions of unfinished scripts and half-thought ideas.

Having completed your screenplay, however, is only the first step. Now you’ve got to share your creation with dozens of other people, each of whom will want to put his or her stamp on the work.

Story editors, readers, producers, directors, actors, financiers, market researchers. To a greater or lesser extent, each of these people has to buy into what you’re selling before your movie will get made.

Sure, if your film is small with a very modest (miniscule) budget, all of these titles may be handled by 3 to 6 people, but even then, you’ll likely run into issues with distribution.

I’m not saying it can’t be done. History is replete with artists who decided to go it alone. But the unwritten backdrop of that history is swamped with the myriad films sitting idle on bookshelves or hard drives, or competing with cavorting kittens and bad karaoke on YouTube or Vimeo.

If you want to share your Art—and I’m betting that you do—then you want outside thought, you want feedback, you want people to contribute.

Don’t look at barriers, but rather seize opportunities to engage. These people are your first audience. Respect them. Use them. Understand them. Do this and you’ll be well on your way to realizing your vision in their world.

(Image is property of owner and is used here without permission because I refuse to let anyone sell out.)

As I continue to plunge my way through a series of magazine features and a new screenwriting class, I haven’t had as much time to write for the blog, so here is another dip into my personal photo archives.

For all its concrete canyons, Toronto has some amazing neighbourhoods and open markets. Two, in particular, form the core of the city, places where the entire city–people of a thousand backgrounds–can gather to shop, drink and talk: Chinatown and Kensington Market.

A quiet day, on Saturdays, this street is shoulder to shoulder with people yelling in every language

Whether mushrooms, teas or sea food, you can find anything dried in Chinatown

A chef’s dream, any recipe can be created from the boxes lining Spadina

One of my favourites from Kensington, the bean bins sadly disappeared a couple years ago

In the summer sun, the colours of the fruit market dazzle

A hatch-work of side streets, Kensington offers shoppers anything and everything

Made to order or off the rack, the smell of this store permeated the neighbourhood

A daily pilgrimage to purchase the day’s repast